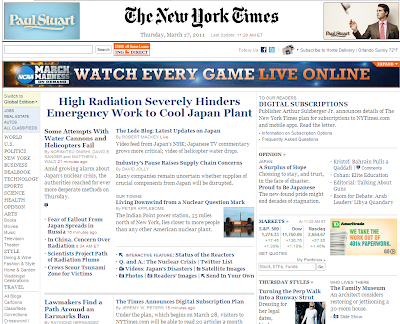 A debate over a paywall raged in the New York Times newsroom for months before executives settled on a flexible pricing strategy. The publication hopes that adaptability will mitigate the problems the newspaper had with a previous paid-content model.

The On Media Blog at POLITICO provides an inside look at the debate over whether to charge readers for access reveals that company insiders hope to accumulate 300,000 online subscribers in the first year and that if necessary, the publication can turn off the paywall.

“Let’s imagine there’s a horrifying story like 9/11 again ...We can — with one hit of a button — turn that meter to zero to allow everyone to read everything they want,” said Chairman Arthur Sulzberger Jr. to a Times reporter.

The Times paywall will activate in the United States on March 28. It is already live in Canada. The Times will limit browsing on its homepage to 20 articles per month, but Sulzberger’s statement makes it apparent there is some wiggle room depending on the circumstances. Users accessing the site from outside links will be able to read those linked articles in full.

A previous experiment in paid-content was discontinued in 2007 after executives decided the program was holding back the paper from increasing its advertising revenue.