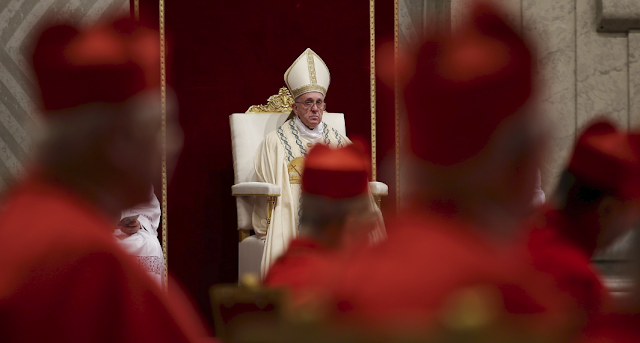 VATICAN CITY (Reuters) - The media should give more space to positive, inspirational stories to counterbalance the preponderance of evil, violence and hate in the world, Pope Francis said on Thursday in his year-end message.

In his brief homily, Francis said the outgoing year had been marked by many tragedies.

"(There has been) violence, death, unspeakable suffering by so many innocent people, refugees forced to leaves their countries, men, women and children without homes, food or means of support," he said.

But he said there had also been "so many great gestures of goodness" to help those in need, "even if they are not on television news programs (because) good things don't make news".

He said the media should not allow such gestures of solidarity to be "obscured by the arrogance of evil".

The Argentine pope, marking the third New Year's season since his election in 2013, condemned the "insatiable thirst for power and gratuitous violence" the world had seen in 2015, without giving examples.

But in his Christmas message last week, he urged the world to unite to end atrocities by Islamist militants who he said were causing immense suffering in many countries.

Security has been very tight at the Vatican since the Nov. 13 Paris attacks in which 130 people were killed.

Police are checking the bags of people as they approach the Vatican area and then have to go through additional, airport-style screening if they want to enter St. Peter's Square or St. Peter's Basilica.

Francis also condemned a political corruption scandal that hit Rome, the city of which he is also bishop. The scandal, known as "Mafia Capital", has spawned a massive trial with 46 defendants that began last month.

Mobsters, bureaucrats and politicians are accused of siphoning millions of euros from public contracts for everything from refugee shelters to trash collection.

The 79-year-old pope, who appears to have held up well during his numerous public appearances over the Christmas and New Year's season, is due to celebrate a Mass on Friday in the basilica to mark the Catholic Church's World Day of Peace.