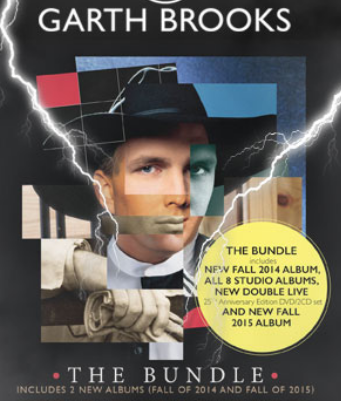 Country-music icon Garth Brooks —who has long refused to allow any download store to sell his music—hopes to show the digital-music world how it’s done.

As the centerpiece of his new strategy, according to The Wall Street Journal, the 52-year-old singer is launching his own iTunes competitor: GhostTunes.

Brooks said in September that he would begin selling digital versions of all his albums, including his latest, “Man Against the Machine,” which comes out Tuesday, though only on his own website. With GhostTunes, which is set to go live the same day, he will be marketing roughly 10 million digital songs by thousands of artists signed to the three major record companies, plus a handful of independents.

GhostTunes, which will include all kinds of music, is designed to let artists sell and bundle concert tickets and merchandise with their music, and it encourages discounts to drive sales. Mr. Brooks will be selling nine studio albums, plus some live material and a 2015 release, for a total of $29.99.

GhostTunes may have timing on its side as well, debuting just a week after one of Nashville’s youngest stars, Taylor Swift, pulled her entire catalog from Spotify. Ms. Swift, 24 years old, hasn’t made her new album, “1989,” available for streaming on any subscription service. Withholding it may have helped her sell nearly 1.3 million copies in the U.S. in its first week on the market, according to SoundScan. Ms. Swift’s catalog withdrawal reignited a long-simmering debate over whether streaming services pay artists enough, even though the amount artists ultimately receive is largely a function of their contract with their record label.

Still, the download business overall is looking increasingly bleak compared with subscription streaming, which is growing at a rapid pace. Music sales at the iTunes Store have fallen more than 13% this year, while revenue from streaming services jumped nearly 30% in the first half of 2014, according to the RIAA.