The daughter of a radio show host David Cannon has died in a car crash in North Carolina.

Payton Alizabeth Cannon, 21, was killed just after midnight on Wednesday when her car veered off a road and hit a tree, news outlets reported.

Cannon’s father is known as Ace in “Ace & TJ,” a syndicated morning radio show that airs in Charlotte.

“Our show has experienced a heart-wrenching blow,” the show posted on Facebook Wednesday. “As you can imagine, we are all devastated, but Ace and his family are especially in desperate need of your prayers.” 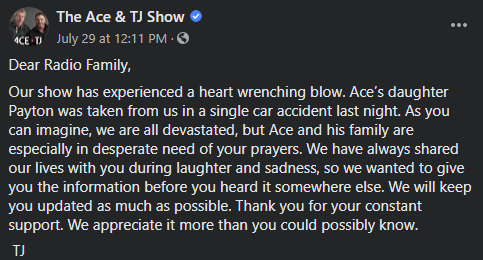 It is believed Payton Cannon was traveling at about 80 mph during the time of the crash, Sgt. Chad Crouse of the North Carolina State Highway Patrol told The Charlotte Observer. The speed limit on the road was 45 mph, he said.
Posted 9:55:00 AM