American record industry rights body SoundExchange has launched a new initiative called Project72, calling on the music community, and music fans, to back legislative proposals put forward by Congressman George Holding and John Conyers that would settle the pre-1972 debate in American copyright law once and for all. 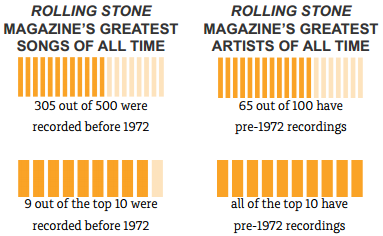 The story so far: under US copyright law, traditional broadcasters do not pay royalties to the record companies for using their recordings. But online radio-style services do. They pay via SoundExchange.

But the law that forces those payments is federal law. Copyright only started being ruled at a federal level in the US in 1972, prior to that it stemmed from state law.

So some digital services are saying they don’t have to pay royalties when they use recordings that pre-date 1972.

Rather than leave this in the hands of the courts to interpret (judges have swung in both directions on this one), the record industry has been lobbying for some legislative clarification.  And if Holding and Conyers’ proposals – dubbed the Respect Act – were to be made law, the digital services would be forced to start paying SoundExchange royalties on the pre-72 recordings.