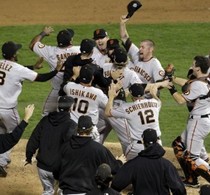 Showtime Networks, Major League Baseball Productions and the 2010 World Series Champion San Francisco Giants are teaming up for a new series chronicling the competitive and complex world of professional baseball. The new series will give viewers a front row seat into the lives of the players, coaches and team personnel as they begin the arduous task of defending their World Series title through the 2011 MLB season.

A collaboration between Showtime and MLB Productions, the soon-to-be-titled series is currently in production and will be shot over the course of ten months in numerous locations at home during the off-season, on to Scottsdale, Arizona for Spring Training and embedded with the team during the regular season.

The series is set to premiere with a preview episode timed to the opening week of the 2011 season, followed by regularly scheduled episodes during the second half of the season.

"This new series is one I've wanted to do for as long as I can remember," said David Nevins, President of Entertainment, Showtime Networks. "Having produced Friday Night Lights, I've received numerous pitches over the years for scripted shows about the world of professional sports, but nothing can capture the drama and intensity of the real thing. We are both honored and excited to have the 2010 World Series Champion San Francisco Giants grant this extraordinary access. The diversity, passion, and larger-than-life personalities of the players, their manager Bruce Bochy, and front office, led by Managing General Partner and CEO Bill Neukom, General Manager Brian Sabean and President Larry Baer, came together to achieve the club's historic World Series win. I'm confident that this group of personalities will make for a provocative and groundbreaking television series that will appeal beyond the hardcore baseball fan to all viewers who appreciate great drama."

"We're constantly seeking new programming platforms to bring our fans closer to the game, and this new series will do exactly that in a very exciting fashion, thanks in large part to the tremendous group of personalities that make up the 2010 World Champion San Francisco Giants" said Chris Tully, Major League Baseball Senior Vice President, Broadcasting. "We're excited to work with Showtime on this project and are grateful to the Giants organization and its players for embracing the goal of giving fans a look inside their world."
Posted 12:02:00 AM