In the wake of two key departures in January, advertisers and affiliates nationwide are keeping a close watch on the ratings of “The Bob & Tom Show,” as this year proves to be a critical one for the morning show that launched in 1983.

An in-depth article titled "‘Bob & Tom Show’ reaches ratings crossroads" in the Indy Business Journal shows that while its ratings have slipped a bit in the first quarter, the WFBQ 94.7 FM show remains a local powerhouse and doesn’t appear in imminent danger of losing advertising revenue or affiliated stations that carry the morning broadcast.

Despite co-host Bob Kevoian’s retirement and cast member Kristi Lee’s defection, the show, which airs from 6 a.m. to 10 a.m., still maintained a ratings edge over its nearest competitor in the local market in two important categories in March, the most recent rating period. 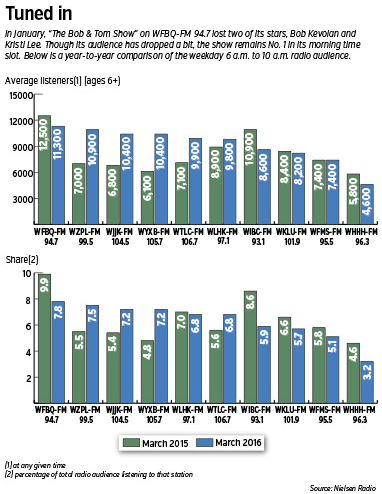 Tom Griswold, the other half of “Bob & Tom,” along with other main characters, including Chick McGee, remain with the show.

While “The Bob & Tom Show” originated locally and is still produced in Indianapolis on iHeartMedia's Q95, the syndicated show is now its own broad-reaching entity. Indianapolis is just one market of 112, in 38 states, for the show’s producers to be concerned about. The ratings will affect not only how many advertisers the show can attract but also its syndication deals.