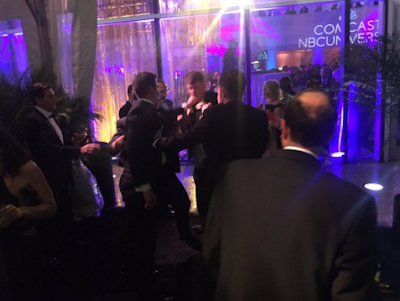 For an event held at the soaring U.S. Institute of Peace building  in Foggy Bottom, the swanky afterparty hosted by MSNBC following the White House Correspondents’ Association Dinner sure saw some conflictm report The Washington Post.

In the early-morning hours of Sunday, 'the nerdy fight (as WaPo put it) broke out between Fox News correspondent Jesse Watters and Ryan Grim, the Huffington Post’s Washington bureau chief.

Here’s how it went down, per several witness: Grim and Watters were among a group located in a heated tent just outside the main party area. The two apparently don’t have a personal relationship, but Grim realized who Watters was and recalled a beef he had with the “O’Reilly Factor” correspondent that dated back to 2009, when Watters, known as an “ambush journalist,” had engineered an on-camera confrontation of writer Amanda Terkel, now a HuffPo colleague of Grim.

Terkel’s account of the incident was headlined “I Was Followed, Harassed, And Ambushed By Bill O’Reilly’s Producer.”

According to The Post, Grim decided to give Watters a taste of his own medicine, whipping out his camera phone and filming him. Watters didn’t take well to this, eventually snatching the phone away from Grim and putting it in his pocket. Grim set out to retrieve it, and a scuffle ensued. No cinematic sparring or broken beer bottles, witnesses said, but the two flailed around a bit, upending a table and bumping into several people.

Before any damage was done, several bystanders, including RNC executive director Sean Spicer, separated the two. Spicer said he didn’t see the lead-up to the fight and said he was just attempting to stay true to the party venue. “Just trying to keep the peace,” he said.
Posted 5:55:00 AM