Cumulus Media ‘s 95.5 PLJ in New York is kicking off the summer season on Friday, May 27, at Jenkinson’s Pavilion in Point Pleasant, NJ, from 6am-10am. Todd & Jayde in the Morning will broadcast live from the pavilion for the second year in a row with LIVE performances by the Goo Goo Dolls, American Authors, Magic & Ruth B!

WPLJ 95.5 FM has hosted this legendary event for 20 years with various activities onsite and a jam-packed morning concert during the broadcast to start the summer right on Memorial Day weekend. This event is free and open to the public and attracts thousands of loyal WPLJ listeners bright and early in the morning year after year.

Meanwhile, Cumulus Media/New York has announced its support of  morning show co-host Jayde Donovan's APPLE-A-DAY program to spread joy to pediatric cancer patients by honoring the memory of her friend Brittany, who passed away from bone cancer five years ago. Jayde, co-host of the station's "Todd & Jayde In The Morning," launched the program on what would have been Brittany's’s birthday, April 22, 2011. Since that time, she and her team of volunteers have surprised 200+ pediatric cancer patients with new iPads.

The APPLE-A-DAY program motto is: “Helping Kids Stay Connected While Fighting Cancer," providing pediatric cancer patients (ages 2-17) with devices (tablets, smart phones) so that they may experience simple joys such as listening to music, FaceTime, taking pictures, and watching movies, enabling them to stay in contact with family, friends, and the outside world.

"I've seen how this one small gesture can change a child's outlook in such a positive way. This technology offers them a bridge into the world they are not currently able to be a part of. My program is not going to change the world, but it can change that child's world," said Jayde. 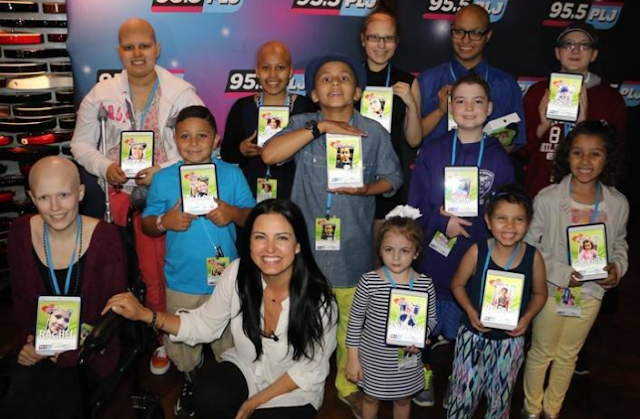 Every weekday in the month of May, Jayde will surprise another pediatric cancer patient with their very own iPad! Listeners will get to hear the stories of patients battling pediatric cancer and how much they will benefit from receiving their very own iPad. The station’s efforts to support this cause will culminate in the giving of iPads to 20 brave kids from the tri-state area at the “iPad Party” hosted by New York’s 95.5 PLJ. The iPad recipients will get to bring their families along for a day of fun at the radio station in June.
Posted 3:07:00 AM