NBC News, Fox News Channel and CNN all had reasons to crow about last week's ratings.

The Holt newscast had the most viewers: 8.277 million. It topped "ABC World News Tonight With David Muir" (8.032 million) and the "CBS Evening News With Scott Pelley" (6.967 million). NBC has won in total viewers for 12 straight weeks and 42 of the 45 since Holt was named anchor.

According to The Orlando Sentinel, all three newscasts pointed to progress: From the same week last year, NBC was up 7 percent, ABC was up 4 percent, and CBS was up 6 percent.

In all of basic cable, Fox News was the most-watched for the total day and No. 2 in prime time behind TNT, which had NBA games.

CNN highlighted that it won the 25-to-54 age group in prime time for the third consecutive week. CNN has pulled off that feat only three times in the last 15 years.

There are three weeks left in the TV season, and CBS continues to hold a slight lead among adults 18-49.

The network has a one-tenth lead over NBC for first place in the demo this season, thanks entirely to February’s Super Bowl. Toss out that game, and the two would be neck and neck.

Through Sunday, the latest numbers available, CBS has averaged a 2.3 18-49 rating, according to Nielsen. NBC is right behind with a 2.2. Fox is a distant third with a 1.9, off a tenth from last year. ABC is in fourth with a 1.8, and it’s fallen the most from last year, down 18 percent from last year. 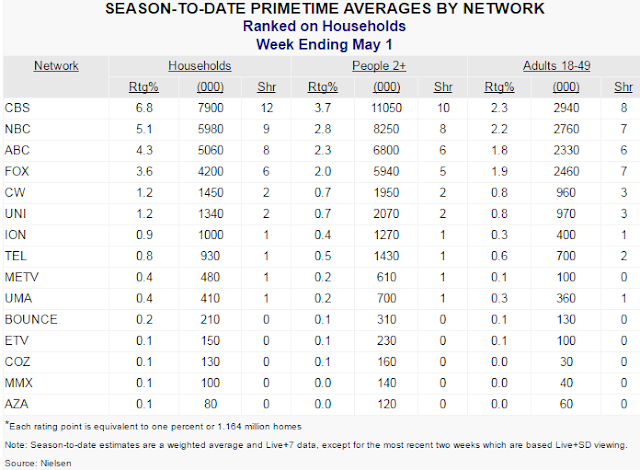 The season ends on May 25. That means CBS just needs to hang on to its position for 21 days to get just its second season-long victory among 18-49s in more than two decades.
Posted 4:14:00 AM