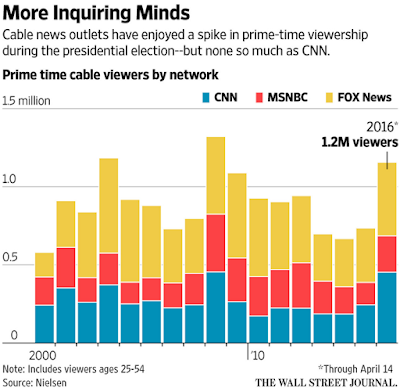 Since the start of the year, when the primary season began in earnest, CNN’s prime-time audience has more than doubled to 435,000 viewers a night in its target demographic of 25- to 54-year-olds, according to Nielsen.

The Wall Street Journal is reporting that after years of weak ratings, the network is nipping at the heels of Fox News, the longtime ratings leader in cable news, whose prime-time audience has grown 42% to 450,000 viewers, and is roughly doubling the audience of MSNBC, the weakest of the three major cable news channels. which is up 73% at 225,000.

Zucker says CNN is benefiting disproportionately from the election race because he repositioned it to appeal to Republicans and Democrats alike.

“I think it was a legitimate criticism of CNN that it was a little too liberal,” Mr. Zucker said. “We have added many more middle-of-the-road conservative voices to an already strong stable of liberal voices. And I think that we are a much more-balanced network and, as a result, a much more inviting network to a segment of the audience that might not have otherwise been willing to come here.”

Competing networks dismiss those claims and say CNN’s ratings rebound looks so significant mostly because the network, which was No. 3 during the previous presidential race, started from such a low base. “CNN has been languishing in the basement so long that they consider getting to the ground level in an election year a wild success,” said a spokeswoman for cable rival Fox News. “That speaks volumes about Time Warner’s low expectations.”
Posted 5:59:00 AM