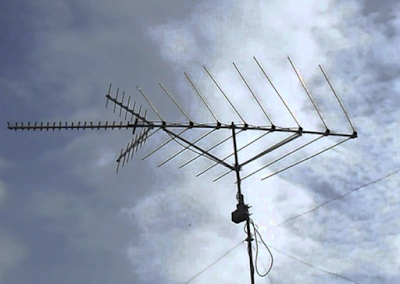 The TV antenna is a piece of 20th century technology that evokes memories of rabbit ears placed atop the mahogany cabinet of the old Zenith in your grandparents’ living room. But a growing number of consumers are turning to over-the-air digital antennas — a one-time investment of as little as $20 — as a way to slash their monthly video subscription costs.

The L-A Times reports research firms and electronics manufacturers say cord-cutting consumers have driven up TV antenna sales and usage in recent years. These “value-conscious streamers,” as they are known in the industry, are willing to cobble together a mosaic of video sources to replace the traditional pay TV bundle, which now costs an average of $107 a month, according to a recent study by the Leichtman Research Group. 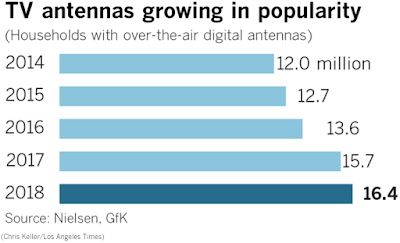 This year, 8.1 million over-the-air TV antennas will be delivered to retailers in the U.S., up 2% from last year and 8% over 2016, according to the Consumer Technology Assn.

The rapid acceleration of cord-cutting has put heavy pressure on the cable industry and media companies that own pay TV channels that depend on the steady revenue stream that subscribers provide. The number of consumers who’ve canceled traditional pay TV service is expected to climb 33% to nearly 25 million this year, according to estimates from research firm eMarketer.

Though worrisome for Hollywood, the trend has been a boon to antenna manufacturers like Channel Master. Although it does not disclose sale figures, the Chandler, Ariz.-based manufacturer has recently doubled the size of its facilities to meet demand for its products, said Joe Bingochea, the company’s president.

The market plummeted in the mid-1980s as consumers moved to cable and satellite to get better picture quality and then-new channels such as HBO, MTV and ESPN. This hurt Channel Master, which went through several ownership changes and a bankruptcy in the decades that followed.

But the brand name is still recognizable to older consumers, which prompted a group of private investors to acquire the company in 2012 and focus on the emerging cord-cutting market.
Posted 2:22:00 AM