Fresno Radio: One Putt To 'Shine The Apple' 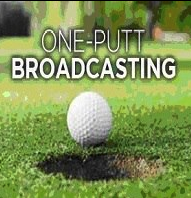 They have purchased the following stations from Atlanta-based Wilks Broadcasting:
One Putt Broadcasting took over daily operations of the three FM stations in November but the deal wasn’t final until the FCC ruling. Now, changes can be made, according to The Fresno Bee.

One Putt partner John Ostlund says there’s not a lot of work to be done.

“The stations were already doing so much right on the air, all we’ve had to do is some tinkering,” Ostlund says. “All we have had to do was shine the apple.”

There won’t be much tinkering with 95.7 The Fox or New Rock 104.1. Ostlund is happy with the formats, especially with the strong ratings produced by the nationally syndicated show “Bob & Tom” that airs mornings on The Fox.

One big change will be an increase in marketing for the new added stations. This includes 50 billboards promoting New Rock.

There is some major tinkering planned for 105.5 The Game, but those changes won’t be announced for a few weeks.
Posted 4:16:00 AM