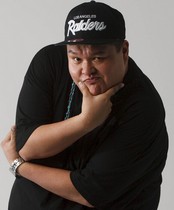 There are some ugly stereotypes about members of the Navajo tribe. For one, that they are silent pushovers, said Courtney Begaye, who is Navajo.

But every weekday morning, on local hip-hop radio station U92, Begaye — the brash, vocal, Oakland Raider-loving host — is changing the stereotype, according to David Burger at The Salt Lake Tribune.

Better known to his listeners as Poetik C, he hosts “The Navajo on the Radio” show from 6 to 10 a.m., waking up nearly 150,000 people from Provo to Ogden to Tooele.

Begaye, who has hosted the morning show for six years, has helped make U92 one of the area’s most listened-to stations. The 34-year-old is one of the reasons U92 was recently named Rhythmic Station of the Year by the respected national trade publication FMQB. In previous years, the award was bestowed on New York City and Los Angeles stations in New York City and Los Angeles.

“Everyone has had a hand in what we do,” said Kevin Cruise, U92 program director, who also was awarded FMQB’s Program Director of the Year.

Poetik C was born and raised in Salt Lake City and has lived in the valley all his life, except for two years when he resided on the New Mexico portion of the Navajo reservation. It was that time away that shaped him as a person and a DJ.