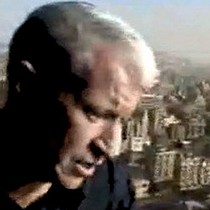 According to a story by Ed Walsh at examiner.com, Hendrie’s pseudo-guest Don Berman, of California TV station Channel 19, talked to Hendrie about being in Cairo, Egypt, and being disturbed about Cooper stealing the limelight after the CNN anchor was attacked a mob of protesters.  Berman said he was traumatized himself by having to wear an unlaundered suit and putting up with bad food and uncomfortable bedding at the Intercontinental Hotel in Cairo.

The TV comics were also quick to make light of Anderson Cooper being attacked.

Jimmy Kimmel:  “Apparently something is going on over in Egypt. Anderson Cooper and his crew got attacked by pro-government forces. He got hit in the head about ten times, and I think he got kicked in the Mini Cooper too.”

Conan O’Brien: “While in Egypt, CNN’s Anderson Cooper was attacked and beaten, which raises two questions. Is it safe to send our media into these places? And how do we get Glenn Beck over there?”

Comedy Central’s Stephen Colbert told viewers, “But these days it seems like you can’t have an armed street mob without it turning ugly and unfortunately one of the exquisite works of art in the region was damaged namely--- Anderson Cooper.

“But folks as bad as it is there, it could get worse because I know because Anderson is still wearing a shirt with a collar   Until Anderson puts on the tight black Donna Karan T-shirt,  legally the UN does not send in Peacekeepers.