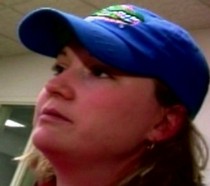 University of Florida graduate Renee Gork was fired from an Arkansas radio station after wearing a Gator cap to a news conference with University of Arkansas football coach Bobby Petrino.

According to gainesville.com, she doesn't expect wearing the cap will be a problem at her new job at UF-owned WRUF 850 AM.

"Technically, my paycheck will come from the University of Florida, so I don't think that will be an issue," she said.

Gork starts Thursday as morning co-host to Steve Russell on the station, known as Sportsradio 850 after its recent change to an all-sports format.

She also will serve as a student-experiences coordinator for UF students working with the university's broadcast stations.

She was working for KAKS, a northwest Arkansas radio station that calls itself Hog Sports Radio, when she made national news in August.

After asking Petrino a question at a news conference, he commented on her hat choice.

"And that will be the last question I answer with that hat on," Petrino said.

Gork said she simply grabbed the cap because it was drizzling and wasn't thinking about the implications of wearing it to the news conference. She said she was working on repairing relations with Petrino when she received word two days later that she had been fired.