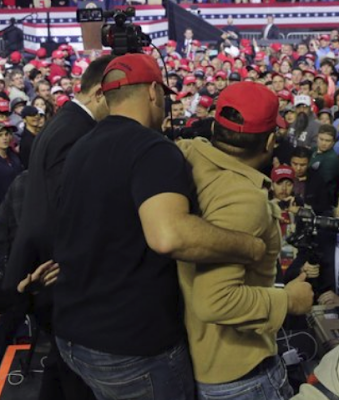 A man is restrained after he began shoving members of the media during a rally for President Donald Trump in El Paso, Texas. (AP Photo/Eric Gay)

The White House Correspondents’ Association (WHCA) condemned the “violent attack” on a BBC cameraman who was shoved at President Trump’s rally in El Paso, Texas, Monday, reports The Hill.

“The White House Correspondents’ Association condemns the physical attack on our colleague at the president’s rally in El Paso, Texas,” WHCA President Olivier Knox wrote in a statement Tuesday. “We are relieved that, this time, no one was seriously hurt.”

A man wearing a "Make America Great Again" hat was seen shoving and swearing at the cameraman Monday night, which the BBC said occurred after Trump “heavily criticized the media at the rally.”

The WHCA called on the president, who often calls mainstream media outlets “fake news,” to relay to his supporters that violence against journalists is unacceptable.

The White House in a statement released later on Tuesday said the president condemned all acts of violence — including those against the press.
Posted 1:51:00 AM