Trump, Acosta Tangle Over The Wall 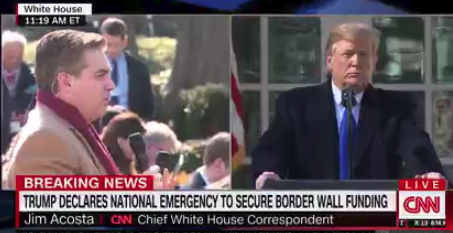 President Trump scolded CNN’s Jim Acosta on Friday during the president's Rose Garden announcement that he is declaring a national emergency on the southern border, telling the reporter he has “an agenda” -- before angel moms in attendance confronted the chief CNN White House correspondent.

According to Fox News, the clash came as Acosta challenged Trump over what he described as a "disconnect" concerning his description of illegal immigration.

Acosta – who has emerged as a hero among progressives for attacking Trump and members of his administration when they’re available to the press – then said stats show “undocumented immigrants committing crime at lower levels than native-born Americans.”

Trump rebuked Acosta by asking, “You don’t really believe that stats, do you?”

As Acosta tried to keep talking, Trump repeated himself.

“Do you really believe that stat? Take a look at our federal prisons,” Trump said as he gestured Acosta to hurry up with his longwinded question.

Trump pointed to angel moms in attendance, asking them for their thoughts.

“You think I’m creating something? Ask these incredible women who lost their daughters and their sons,” Trump said. “OK, Because your question is a very political question because you have an agenda. You’re CNN. You’re fake news.”

Trump told Acosta the statistics he provided were “wrong” and told him to take a look at the federal prison population for proof.
Posted 5:06:00 AM