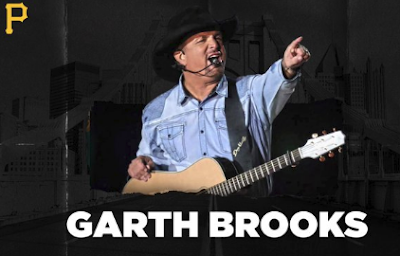 The Pirates made waves on the first day of Spring Training when they announced that country music star Garth Brooks would join them for the first week of camp. reports mlb.com.

It isn't unusual for celebrities to show up at Spring Training, either through charities or to live out their dreams of being a baseball player. This isn't even the first time Brooks has shown up to Spring Training. He was with the Padres in 1998 and '99, the Mets in 2000 and the Royals in 2002. This time around, he's marking the 20th year of his Teammates for Kids Foundation.

It didn't take long for Brooks to lace up the cleats and hit the field. He took some grounders at third base, and actually looked pretty good doing it:


So @GarthBrooks just made me promise to show you only the good plays he made in taking grounders at third. Keeping my word, here it is: ;) #DKPS #Pirates pic.twitter.com/ACViPiPVew
— Dejan Kovacevic (@Dejan_Kovacevic) February 11, 2019

Even though the Pirates are the fourth team he's appeared with, they're first in his heart. Because of Roberto Clemente, Brooks grew up as a Pirates fan. That, coupled with the 20th anniversary of his foundation, made this a great opportunity:

"We're celebrating 20 years, and the Bucs were sweet enough to let me come here," Brooks explained regarding his foundation. "This has been my team since I was a kid. I'm a Roberto Clemente fan. The day he died, I promised him that I would do some foundation work with baseball. This came really late in my life, but I feel very lucky now we're celebrating 20 years. Here's to 20 more."
Posted 2:09:00 AM