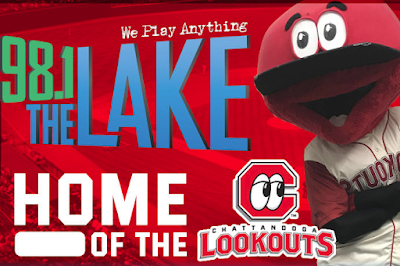 Entercom Communications and the Chattanooga Lookouts have announced a broadcast partnership.

As part of the multi-platform agreement, Adult Hits WLND 98.1 FM will become the new flagship station for the team beginning in 2019. In addition to airing all regular and postseason game broadcasts on the station, beginning with the team's season opener on April 4, the games will also be available on the RADIO.COM app. Lookouts baseball games previously aired on Entercom sister WUSY 96.1 FM HD2.

"We're pleased to welcome Chattanooga's hometown minor league baseball team to 98.1 The Lake," said Entercom Chattanooga Senior VP/Market Manager Nichole Hartman. "As the new flagship broadcast home for the Lookouts, we look forward to hitting it out of the park for listeners with exclusive content and exceptional coverage via this multi-platform agreement."

"We couldn't be more excited to team up with such a great radio group," added Chattanooga Lookouts President Rich Mozingo. "We are looking forward to a great 2019 season on 98.1 The Lake."

Southern League Hall of Fame announcer Larry Ward will continue play-by-play duties, a role he has held for the past 31 consecutive seasons.
Posted 1:47:00 AM