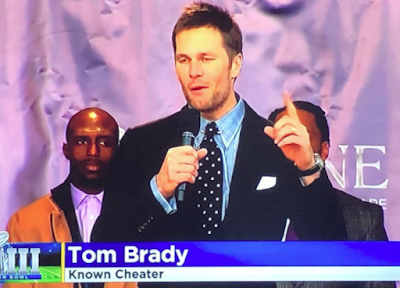 A local television station in Pittsburgh fired an employee who added a “known cheater” graphic during a segment featuring the New England Patriot's quarterback, Tom Brady.

A spokesperson for CBS affiliate KDKA told Sports Illustrated on Wednesday that the employee responsible for Monday’s chyron is no longer at the station.

“While fans are entitled to have personal opinions, we have a journalistic responsibility to provide unbiased reporting,” KDKA said in a statement. “The graphic that appeared Monday violated our news standards. The individual who created the graphic no longer works for KDKA-TV.”

According to The Hill, the chyron appeared during a segment gearing up for Sunday's Super Bowl between the Patriots and the Los Angeles Rams.

The Patriots' quarterback drew sharp criticism following 2015’s “Deflategate” scandal in which Brady was suspended without pay for four games for violating the NFL policy on the integrity of the game.

The producer who aired the graphic identified himself as Michael Telek on Twitter on Wednesday afternoon, calling the incident a “joke”
Posted 1:49:00 AM