On his nationally syndicated radio show Frioday, Tom Joyner announced the One More Time Experience multi-city tour, which includes concerts that bring the music and celebration of his daily Party With a Purpose, The Tom Joyner Morning Show.

Dates begin on May 10th and continue throughout the summer. Joyner, a huge fan favorite who changed the radio landscape, launches this tour with a routing that allows his audience to join the celebration and toast Tom for his longtime commitment to entertain, inform and empower. Each tour date will showcase Tom and friends, including artists like Maze featuring Frankie Beverly and KEM. Stay tuned for more artists to be announced.

In making the announcement, Tom Joyner offered "What better way to say thank you to the people I owe my career to!  I hope everyone will be as excited as I am to celebrate with good music, good fun and good hugs!  We have 25 years worth of partying to achieve, so let's do it together, with the ultimate One More Time Experience!"

The planned tour dates as of this announcement follow below, while more dates and other artists are expected to join in the celebration. 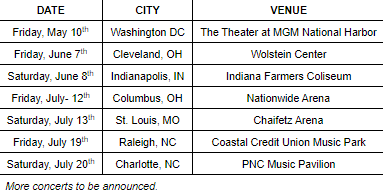 The full lineup can be found at BlackAmericaWeb.com. Radio stations in the tour markets will host the event and link to ticket sites, while surrounding markets will have the opportunity to invite their audiences as well.

Joyner - who first gained popularity after earning his nickname "The Fly Jock" while flying round-trip between Dallas and Chicago for seven years and eight million miles - hosted morning and afternoon shows in two different cities. Joyner revolutionized radio, becoming the first morning show with music in syndication launching January 3rd 1994. Joyner announced that he would retire from broadcasting in December of 2019, capping one of the greatest careers in communications.
Posted 4:29:00 AM