Trump Tells CBS: Pelosi Is "Very Bad For Our Country" 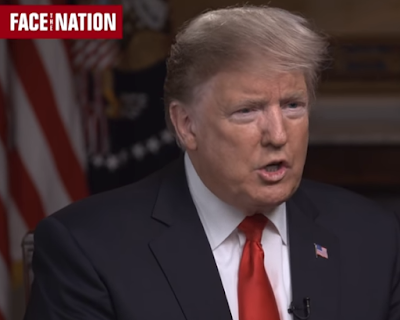 Days before a State of the Union address in which he's expected to stress unity, President Trump said House Speaker Nancy Pelosi is "very bad for the country," in an exclusive interview to air Sunday with CBS News "Face the Nation" host Margaret Brennan.

CBS News also reports the president suggested Pelosi "doesn't mind human trafficking," or she wouldn't oppose funding his border wall. Mr. Trump sat down for nearly an hour in the White House Blue Room Friday afternoon in a wide-ranging interview that will air on "Face the Nation" Sunday morning and prior to the Super Bowl.

"Well, I think that she was very rigid — which I would expect — but I think she's very bad for our country," the president said, when asked what he learned after negotiating with Pelosi in recent weeks. "She knows that you need a barrier. She knows that we need border security. She wanted to win a political point. I happen to think it's very bad politics because basically, she wants open borders. She doesn't mind human trafficking or she wouldn't do this."

Brennan's interview with the president comes days before his first State of the Union address in a divided government, and two weeks before government funding for several federal departments and agencies runs out on Feb. 15.


Mr. Trump said Thursday he doesn't think lawmakers will reach a deal to fund his border wall. Mr. Trump told Brennan that Pelosi is doing a "terrible disservice to our country."

"She's — she's costing the country hundreds of billions of dollars because what's happening is, when you have a porous border and when you have drugs pouring in, and when you have people dying all over the country because of people like Nancy Pelosi who don't want to give proper border security for political reasons — she's doing a terrible disservice to our country," the president told Brennan Friday.