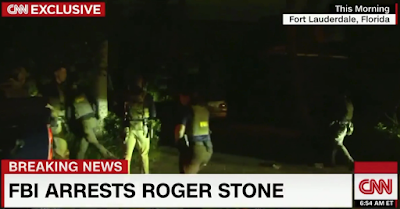 Sen. Lindsey Graham (R-S.C.), the chairman of the Senate Judiciary Committee, has requested that the FBI give a briefing to the panel about last week's arrest of longtime GOP operative and former informal Trump adviser Roger Stone.

Graham sent a letter to FBI Director Christopher Wray on Wednesday expressing concerns about the "manner" in which Stone was arrested, including the number of agents involved in taking Stone into custody, "the tactics employed" and the timing of the arrest.

The GOP chairman asked the FBI to brief the Judiciary Committee by Feb. 5.

"Although I am sure these tactics would be standard procedure for the arrest of a violent offender, I have questions regarding their necessity in this case," Graham wrote.

Armed FBI agents arrested Stone on Friday during a pre-dawn raid at his home in Fort Lauderdale, Fla. Stone was indicted on seven counts as part of special counsel Robert Mueller's probe into Russia's election interference.

President Trump suggested in a tweet last week that CNN was tipped off about the early morning raid. The network obtained exclusive footage of FBI agents knocking on Stone's home in Florida.

The Hill reports CNN has said it sent a camera crew to Stone's home following unusual grand jury activity the previous day. The network also responded to Trump's tweet, saying, "CNN’s ability to capture the arrest of Roger Stone was the result of determined reporting and interpreting clues revealed in the course of events. That’s called journalism."
Posted 1:18:00 AM