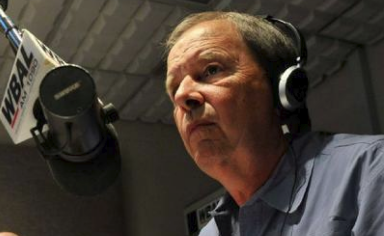 Dave Durian, a former anchor for WBAL Radio, died of complications of cancer and a stroke Monday at his home in Baltimore County.

He was 72, according to the Baltimore Sun.

“He was the smoothest reader of the news I’ve ever met,” said a WBAL-Radio colleague, John Patti, the morning news anchor. “He could read it cold — you could give him a piece of news copy and he read it so effortlessly he made it sound like it had been news all morning.”

He earned a degree in journalism at the University of Iowa and worked the weekend anchor for the television station WOI. He remained in broadcast work and held posts in Rock Island, Ill., and Kansas City.

Durian came to Baltimore in 1982 from KDKA in Pittsburgh, where he was an Evening Magazine co-host, and became a lead anchor at WBAL-TV 11 and appeared with Stan Stovall. He spent more than three years as the television news anchor and was replaced in 1986.

When Durian left the station he worked at Maryland Public Television. In 1988 he returned to News/Talk WBAL 1090 AM as a talk show host, where he remained until he stepped down in 2012.

“Dave loved being on radio because of how familiar you can be,” Mr. Patti said. “He had the ability to connect with listeners.”


Our friend and colleague Dave Durian passed away at 2:30 this morning after a battle with lung cancer and a stroke. Here are some memories of one of the smoothest broadcasters there ever was.https://t.co/tny9ZwNuZa
— John Patti (@JohnPattiWBAL) January 28, 2019

In 2012 Mr. Durian, then a well-known presence on Baltimore radio for more than two decades, stepped down as anchor of WBAL's morning drive-time news program.

He also stayed active in the WBAL Radio "Kids' Campaign" charity efforts and the annual remote broadcasts from Valley View Farms. He did voice-over work for commercials, too.
Posted 1:00:00 AM