Amazon.com Inc on Thursday forecast first-quarter sales below Wall Street estimates, warning that new regulations in India had created uncertainty around one of its key growth markets and saying it would step up investments in 2019.

According to Reuters, the outlook overshadowed Amazon’s record sales and profit during the holiday season. Fast and free shipping helped the world’s largest online retailer boost revenue by 20 percent. A lucrative cloud computing business, as well as fees that merchants pay Amazon to ship and advertise their products, has fattened the company’s once-thin profit margin.

Net income jumped 63 percent to $3 billion for the fourth quarter, ahead of analysts’ estimates.

Yet investors focused their attention on Amazon’s international operation, where the company has long lost money in the hopes of future profit. Though its international operating loss shrunk to $642 million in the quarter from $919 million a year earlier, new regulations in India are poised to take a toll. The rules seek to protect local businesses by prohibiting foreign e-commerce companies from selling products via vendors in which they have an equity interest. 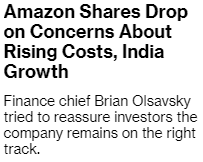 Brian Olsavsky, Amazon’s chief financial officer, said on a call with reporters that the “situation in India is a bit fluid right now.”

The company forecast net sales of between $56 billion and $60 billion for the first quarter, missing analysts’ average estimate of $60.77 billion, according to IBES data from Refinitiv.

Olsavsky said that investments would increase this year. The company had little need to splurge in 2018 thanks to prior spending on warehouses, headcount and other areas, boosting profit. But this year investments will rise, though Olsavsky did not detail where or how much.

A large chunk of the company’s hiring has gone to Amazon Web Services, its lucrative business selling data storage and computing power in the cloud. Revenue for the unit surged 45.3 percent to $7.43 billion, beating an average estimate of $7.26 billion.

Overall, net sales for the fourth quarter were $72.38 billion and beat analysts’ average estimate of $71.87 billion on the back of a strong holiday season, which includes the major U.S. shopping event Black Friday.

Ad sales and “other” revenue jumped 95 percent to $3.4 billion in the fourth quarter.

You will find more infographics at Statista
Posted 3:48:00 AM