The AM Confidential: Trump Facing Growing Calls For Removal 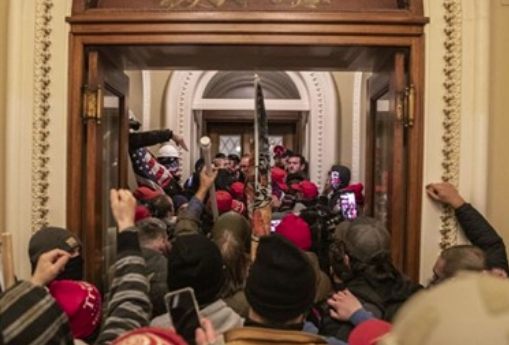 ➤TRUMP RELEASES NEW VIDEO: President Trump was the subject of growing talk Thursday about removing him from office before the end of his term on January 20th because of his actions egging on his supporters before they went on to storm the Capitol Wednesday. In the face of that, Trump released a brief new video in which he condemned the the violence that had taken place at the Capitol, after having a day earlier said of the rioters, "We love you" and you're "very special." He also finally acknowledged there would be a new administration -- although never mentioning President-elect Joe Biden by name -- and said he would focus on helping ensure there is a smooth transition of power, adding, "This moment calls for healing and reconciliation." For the more than two months since the election, Trump had until that video insisted that he'd won and was cheated out of his victory by massive voter fraud.


House Speaker Nancy Pelosi yesterday charged that Trump had, quote, "incited an armed insurrection against America," calling him "a very dangerous person who should not continue in office." She urged that the 25th Amendment be used by Vice President Mike Pence and members of the Cabinet to remove Trump from office, and said that if that wasn't, the House was eyeing impeaching Trump again, even though his term ends in just 12 days. It was reported, however, that Pence is opposed to using the 25th Amendment to oust Trump.

In further fallout of the storming of the Capitol and the Trump's actions leading up to it: 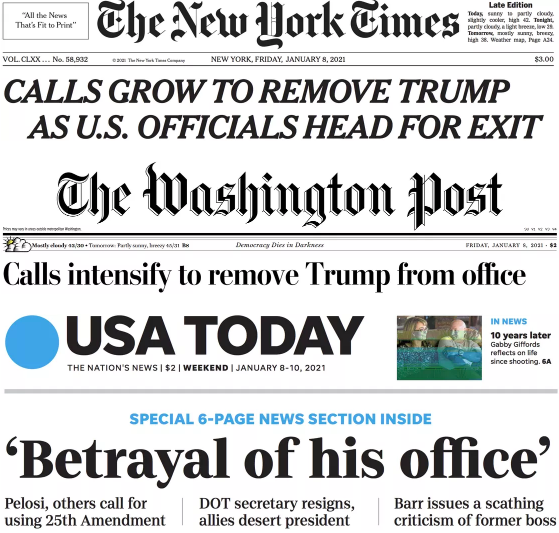 USA Today just came out in favor of a 25th Amendment removal. They are running my column as the opposing view. https://t.co/44doQBIzUm In order to impose this ignoble moment on Trump, the Congress would create precedent for future such removals on ill-defined mental disabilities.

➤CAPITOL POLICE REJECTED OFFERS OF HELP; INJURED OFFICER DIES: U.S. Capitol Police twice rejected assistance related to the pro-President Trump rally that led to the Capitol being breached, the Associated Press reported Thursday. The Pentagon asked the Capitol Police three days before Wednesday's planned rally if it needed National Guard forces, and as the rioters stormed the Capitol, the Justice Department offered FBI agents, and they were turned down both times, according to the report. Despite the warnings about what could happen, the Capitol Police only planned for a free speech rally, and in the wake of criticism over the response to last summer's Black Lives Matter protests near the White House, officials didn't want the appearance the active duty or National Guard troops were being deployed against Americans, according to AP. U.S. Capitol Police Chief Steven Sund was forced to resign yesterday under pressure from congressional leaders, as was the Sergeant at Arms of the Senate and the Sergeant at Arms of the House.

A Capitol Police officer who was injured after responding to the riots died last night. Officer Brian D. Sicknick died due to injuries he suffered while, "physically engaging with protesters," according to a statement.


Meanwhile, The Washington Post reported yesterday that the Pentagon put tight limits on the D.C. National Guard ahead of the Wednesday's protest to keep the use of military force constrained, with the guardsmen carrying out a narrow mission requested by Mayor Muriel Bowser to help handle traffic. They were barred from receiving ammunition or riot gear, interacting with protesters unless necessary for self-defense, sharing equipment with local law enforcement, or using Guard surveillance and air assets without the defense secretary’s approval. The Post said those limits were imposed because the Guard hadn't been asked to help with crowd or riot control. When the Capitol was stormed and Capitol Police asked for help from the National Guard, it was denied by the office of the secretary of the Army, with the Post citing an official as saying they didn't want the "optics" of soldiers in the Capitol building. Higher-up Pentagon leaders later activated the full D.C. Guard. Maryland Governor Larry Hogan said yesterday that he'd gotten frantic calls from House Majority Leader Steny Hoyer asking that he send the Maryland National Guard, but federal authorization was being refused. Finally, Hogan said he got a call from the Army secretary about 90 minutes later asking if the guardsmen could, quote, "come as soon as possible."

In some much-needed good news, new research suggests that Pfizer’s vaccine can protect against mutations first found in the U.K. and South Africa, which have been causing concern around the world because they are more contagious. The both share a common mutation, but Pfizer's vaccine seems to work against it. However, researchers say that even if the virus eventually mutates enough that the vaccine needs to be adjusted, it wouldn't be difficult to do.

➤BIDEN ANNOUNCES GARLAND AS ATTORNEY GENERAL PICK: President-elect Joe Biden made official Thursday what had been reported a day earlier, announcing Judge Merrick Garland as his pick for attorney general. Biden presented his choice as moving to de-politicize the Justice Department after President Trump, saying, "More than anything, we need to restore the honor, the integrity, the independence of the Department of Justice that’s been so badly damaged." Biden said that Garland's loyalty would be to the law and Constitution, saying to him, "You don't work for me." Garland, who held senior positions at the Justice Department decades ago, was the judge chosen by then-President Barack Obama for the Supreme Court after the sudden death of Justice Antonin Scalia in February 2016. However, his nomination was blocked by Senate Republicans, who refused to bring it up for a vote, saying the winner of the November election should fill the seat. Donald Trump won, and as president appointed Neil Gorsuch to the seat.
➤PENCE EXPECTED TO GO TO BIDEN'S INAUGURATION, TRUMP TO MAR-A-LAGO:
Vice President Mike Pence is expecting to attend President-elect Joe Biden’s inauguration in less than two weeks, Politico reported yesterday (January 7th), citing three sources as saying he'd like to go in a show of support for the peaceful transition of power. The sources also said the decision to go became easier after President Trump publicly criticized Pence because of his refusal to block the certification of Biden's electoral college win, something he didn't have the power to do in his ceremonial role in Wednesday's counting of the votes anyway. Trump, meanwhile, hasn't said if he's going to the swearing-in, but it's not expected, with the president having told staff he doesn't plan to be there. Instead, it's being discussed that Trump and First Lady Melania Trump might leave the day before the inauguration to fly to Mar-a Lago so he won't be in Washington for it. Part of the reason is also that he wants to fly on Air Force One, and if he leaves after Biden is sworn in, he'd have to ask him to use the plane, which is customarily done.
➤MERCURY, JUPITER, AND SATURN WILL FORM A RARE ‘TRIPLE CONJUNCTION’: If you thought the “Christmas star” was a big deal when it graced the sky in 2020, just wait til you hear what’s coming up this weekend. From this evening (Friday, January 8th) through Monday evening (January 10th) Mercury, Jupiter, and Saturn will be visible in the night sky at the same time. NASA says, “[…] the planet Mercury will appear to pass first by Saturn and then by Jupiter as it shifts away from the horizon, visible each evening low in the west-southwest and setting before evening twilight ends.” Forbes reports the three planets will be in the same two degrees of the sky in the Capricorn constellation. EathSky.org says you can see the event by looking for Jupiter first, then spotting Saturn and Mercury—Jupiter will be the brightest of the three. The last time this triple conjunction occurred was in October 2015, and after this weekend the next time it will happen will be February 13th, 2021.
➤KFC ROLLS OUT NEW CHICKEN SANDWICH: As the fast-food chicken wars continue, KFC has announced a new sandwich offering—the KFC Chicken Sandwich. It’s made with double-breaded chicken breast filet and pickles on a brioche bun, with either spicy or non-spicy mayo. KFC calls the sandwich the “best” ever, and the brand promises each one will be made to order. The sandwich is currently available at “select” restaurants in Chicago, Kansas City, Louisville, Portland (Oregon), St. Louis, Sacramento, San Francisco, Seattle and Tulsa (Oklahoma). Fans can visit KFC.com/findthesandwich to learn where it will become available next.

Bold colors in shades of brown, red and green are a nod to Burger King’s flame grilling process and its use of fresh ingredients, the company said... pic.twitter.com/WXzajk5tgt

➤BURGER KING REVAMPS BRAND FOR FIRST TIME IN OVER 20 YEARS: Burger King announced yesterday that it has redesigned its brand, including its logo, food packaging and restaurants in order to reflect improvements they’ve made over the last 20 years. The rebranding includes a new logo with a rounded font that mirrors the shape of its burgers and other menu items. The brand says the new colors—brown, red, and green—are a nod to the brand’s flame grilling process and its use of fresh ingredients. Earlier this year Burger King announced it would remove all artificial colors and preservatives from its signature Whopper burgers. They also noted they’ll be keeping their mascot, The King.
🏀76ERS' CURRY TESTS POSITIVE FOR CORONAVIRUS: Philadelphia 76ers guard Seth Curry tested positive for the coronavirus last night, with the team finding out near the start of their 122-109 loss to the Brooklyn Nets, ESPN reported. Curry, who sat out the game with ankle soreness, was on the bench for the first quarter, wearing a face mask in line with the NBA's rules. However, he left the court area and went into isolation after the 76ers found out about the positive result.

The Cleveland Indians have traded star shortstop Francisco Lindor and pitcher Carlos Carrasco to the New York Mets in a six-player deal.


⚾INDIANS TRADE LINDOR, CARRASCO TO METS: The Cleveland Indians traded four-time All-Star shortstop Francisco Lindor and pitcher Carlos Carrasco to the New York Mets yesterday in return for young infielders Andrés Giménez and Amed Rosario, and two minor league prospects. Trading Lindor, who's eligible for free agency after the upcoming season, takes about $30 million off the Indians' payroll, which will help them rebuild. Meanwhile, the Mets have a new owner, Steve Cohen, who wants to spend on his team.
➤UFC'S RIVERA ARRESTED, CHARGED WITH ATTEMPTED MURDER: UFC fighter Irwin Rivera was arrested Thursday on two counts of attempted murder in Boynton Beach, Florida, according to ESPN, accused of stabbing his two sisters. Police found the 22-year-old and 33-year-old women with multiple stab wounds after being called to a home, and they were rushed to the hospital. One told police they were staying with Rivera in one of his spare rooms and woke up to him repeatedly stabbing them with knife before he fled. After Rivera was apprehended by police, he told them he stabbed his sisters because it was his purpose, told to him by a, quote, "higher power." The 31-year-old, who debuted for the UFC in May, last fought at UFC Fight Night on September 19th.

➤TRUMP GIVES MEDAL OF FREEDOM TO GOLFERS SORENSTAM, PLAYER, ZAHARIAS: President Trump awarded the Presidential Medal of Freedom yesterday to Hall of Fame golfers Annika Sorenstam and Gary Player, and late Olympian golfer Babe Didrikson Zaharias. Although Trump has usually held public ceremonies when presenting the Medal of Freedom, one of the nation's highest civilian honors, yesterday's event was closed to the media. It was held the day after the storming of the Capitol by pro-Trump supporters.
Posted 4:28:00 AM