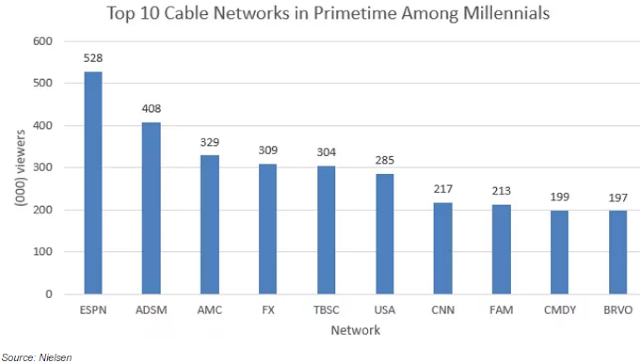 Millennials watch less traditional television than their older counterparts, and that’s true for cable as well as broadcast, where the top networks among adults 18-34 draw roughly half the primetime audience as the top networks with 18-49s.

So which cable networks top the charts among Millennials this fall?

According to MediaLife, the top two are certainly no surprise. ESPN leads, as it does in every demographic, with an average 528,000 18-34s in primetime, according to Nielsen.

That’s well ahead of the No. 2 network, Adult Swim, which targets this younger demo with edgy cartoons. It’s averaging 408,000.

AMC ranks third, reflecting the popularity of “The Walking Dead” among Millennials. It’s the No. 1 cable show in the demo, and indeed across every adult group.

FX ranks fourth, followed by TBS, which is not in the top five among 18-49s.

Outside the top five, though, at least one network is more surprising — CNN at No. 7. It’s an election year, so that’s perhaps to be expected, but it’s still unexpected given Millennials’ well-documented penchant for inhaling digital news rather than news on TV.
Posted 3:44:00 AM