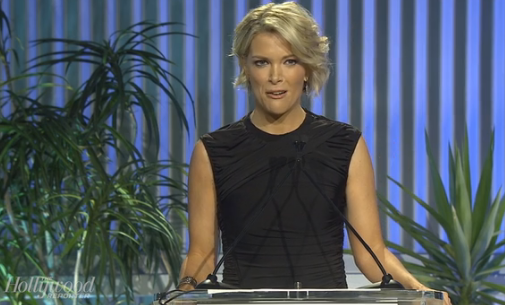 On Wednesday morning, Megyn Kelly gave opening remarks at the annual Hollywood Reporter Women in Entertainment celebration, and had kind things to say about Michelle Obama ("who set the example for us all in standing up for her convictions") and Hillary Clinton ("who broke a barrier no one has ever done in America") and Melania Trump ("who was slut-shamed...but she held her head high"

According to USAToday, Kelly also made reference to Roger Ailes, commending her female colleagues at Fox News who "at great risk to their livelihoods brought down a very powerful, serial sexual harasser."

But then Kelly transitioned to the president-elect. "I have high hopes for him. Despite the tweets and all the rest of it there is much to admire about Donald Trump," she began.

Boo!" rang out a few scattered voices at the seated affair, followed by Kathy Griffin raising her middle finger in the air. "There is. Stop that," chided Kelly, before she spotted Griffin and followed up with a joke.

Tina Fey, who received the Sherry Lansing Leadership Award (and was introduced by Jon Hamm), later started her speech on a wry note. "What an amazing year it's been for women," Fey said, before buckling over the podium and laughing wildly. "How we can proceed in dignity in this increasingly ugly, misogynistic time?" she asked.

Look to Lansing, the former CEO of Paramount (and the first woman to head a Hollywood studio), she suggested. "You know Sherry Lansing has witnessed some nonsense and some behavior that the young people today would call 'triggering,'" Fey said. "And yet she was able to flourish with all of her humanity intact ... Maybe that's the mantra we can all take with us over the next four years."

Mary Berner, President and Chief Executive Officer, Cumulus Media, was among those named to The Hollywood Reporter's  2016 Women in Entertainment Power 100 list.

Berner is the only radio executive on the list and is one of 26 new names on this annual listing of Hollywood's most powerful women in entertainment. Click Here for the full listing.
Posted 3:34:00 AM