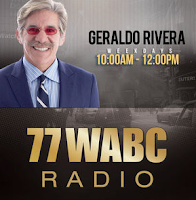 The New York State Supreme Court has tossed a breach of contract suit filed one year ago by Geraldo Rivera against Cumulus Media.

According to InsideRadio, the suit claimed the company’s top management reneged on a $600,000 deal for Rivera to continue hosting a daily radio show in New York.

The 73-year-old investigative reporter’s Dec. 2015 suit claimed that Cumulus locked him out of his studio and office at WABC 770 AM after refusing to honor a one-year agreement for 2016.

It added that Cumulus, along with Rivera’s agent, executed a written agreement on Aug. 13, 2012 for Rivera to host a 9am-1pm syndicated radio show. Rivera began anchoring a New York-only show for Cumulus starting in January 2014, when the company yanked his late-morning talk show from syndication. The agreement expired Dec. 31, 2015 and specified that any continuation after that date would be “at will” and could be terminated without obligation by either party by giving notice to the other.

Rivera claimed that then-Cumulus executive VP John Dickey, in fall 2015, orally proposed a one-year contract extension for 2016 and that the company’s new management wrongfully refused to honor it. In an email to Rivera on Sept. 30, Dickey “acknowledged the employment agreement,” the suit says, when he wrote: “Thanks Geraldo. I admire your work and your loyalty. Glad you will be covering the election on 77 WABC next year.” Cumulus denied that any such agreement existed, and noted that an oral agreement was barred by a clause in Rivera’s original 2012 contract.
Posted 3:07:00 AM