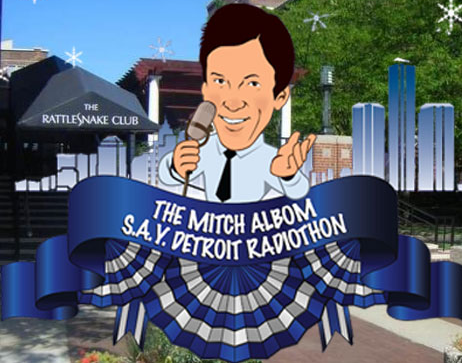 The fifth annual Mitch Albom/S.A.Y. Detroit Radiothon was once again a major success, surpassing expectations by raising roughly $1,041,000 during Thursday's 15-hour event in the Grand Court of the Somerset Collection mall in Troy.

"Frankly shocked that we matched last year's $1 million total," Albom said on Friday. "The last year has been a tough one, depressing for many Americans, and so I wasn't sure the spirit of giving would shine through. ... Very thankful to everyone who participated."

The program, hosted by Albom and radio partner Ken Brown, ran from 6 a.m. to 9 p,m. on WJR 760 AM and auctioned off numerous items. It was live-streamed at freep.com, mitchalbom.com and on Albom's Facebook, reaching viewers from all over the world, including the Philippines, United Kingdom, Australia and New Zealand.

The Detroit Free Press reports the event was boosted by countless celebrities, both in person and through call-ins.

Every dollar raised will go to one of S.A.Y. (Super All Year) Detroit's nine charities or affiliated charities in Detroit that it supports.
Posted 4:10:00 AM