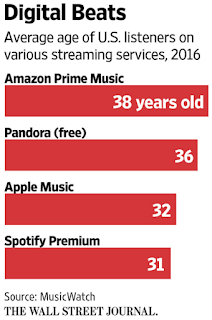 Although older, wealthier music fans raised in the age of record stores make up the demographic that is most comfortable with the idea of paying for music, they’ve been among the most reluctant groups to pay for monthly streaming subscriptions, which offer ad-free access to up to tens of millions of songs.

The Wall Street Journal reports, last year less than 2% of consumers above the age of 45 opted to pay for an on-demand music service such as Apple Inc.’s Apple Music or Spotify AB’s Premium, while 11% of 18- to 24-year-olds did so and 8% of 25- to 34-year-olds paid, according to a survey by research firm MusicWatch Inc.

While older consumers can generally be slower to adopt new technology, there are other factors at play. Streaming companies have been primarily built by young techies and generally use a “DJ model” to cater to a younger audience, promoting pop-heavy playlists that serve primarily as soundtracks for activities such as partying, exercising and “chilling.” Record companies, meantime, haven’t rushed to convert their album buyers to subscribers, since physical music sales are still highly profitable and accounted for nearly 40% of the recorded music industry’s global revenue last year.

The over-50 “demo is largely being ignored in the digital world even though these folks are the most passionate about music because they lived all of it the first time around,” said Fred Goldring, a 58-year-old veteran music lawyer who co-founded Music Aficionado with Mr. Penn and another partner: Greg Di Benedetto, the former publisher of Guitar World and Guitar Aficionado magazines.

The industry is hoping that Pandora will help convert its older free listeners into paying subscribers when it launches its own $10-a-month, on-demand tier early next year. More than 50% of Pandora’s users are under the age of 34, while its most active users are 24 and younger. Amazon.com Inc.’s new Amazon Music Unlimited service could also appeal to the online retailer’s older customer base.