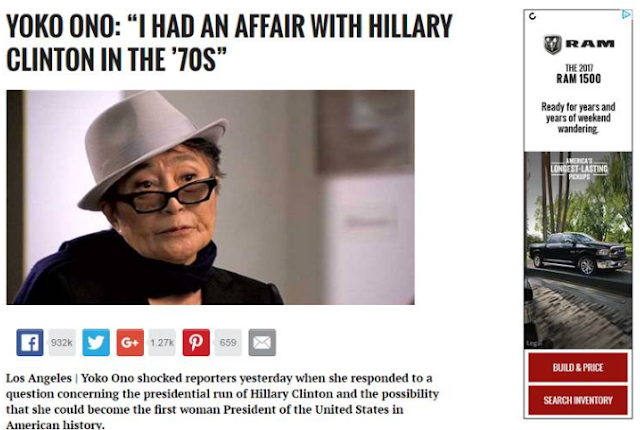 “Yoko Ono: ‘I Had An Affair With Hillary Clinton In The ’70s,’” read the headline in World News Daily Report, a website that peddles made-up stories.

According to The Wall Street Journal, big brands, often inadvertently, are helping fund the websites at the center of a growing controversy over misinformation on the internet.

Ads from companies such as Choice Hotels, SoundCloud and Bose Corp. appear on sites with false or misleading news. Those companies are among thousands of brands that could appear on such sites based on a user’s browsing history or demographics.

Industry executives say some fake-news sites can generate tens of thousands of dollars in monthly revenue from online ads.

Well-known brands’ appearance on fake-news sites reflects the complexity of online advertising, where computers can place a different ad each time a user clicks on a webpage. Multiple middlemen are often involved, leaving both publishers and advertisers uncertain about which ads will appear where.

Google, the biggest player in digital advertising, said it would stop placing ads on sites with “deceptive or misrepresentative” content. But so far, enforcement appears spotty: Many Google-placed ads, including those for big brands, continue to appear on the sites, even including ads for Google’s new Pixel smartphones.

AppNexus Inc., which runs an online-ad exchange, said it also tries to not place ads on fake-news sites. Last month, AppNexus pulled its ads from the right-wing news site Breitbart because of what it said was hate speech on the site. Some big brands, including food company Kellogg Co. and insurer Allstate Corp., have blocked their ads from appearing on Breitbart.