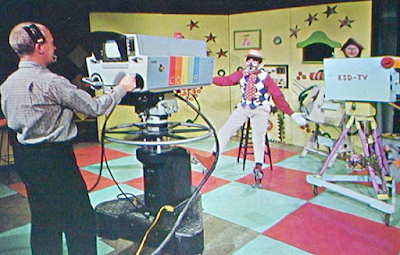 “Corky the Clown” is gone.

He was 92-years-of-age, according to stltoday.com.

“I don’t think I ever heard him say a bad word about anyone,” said his son, Chip St. James. “And in the TV business, that’s saying something.”

Mr. St. James was born June 3, 1925, in Niagara Falls, N.Y., he joined the Army in 1943, serving with the 591st field artillery battalion of the 106th Infantry Division in northern France and Germany, including the Battle of the Bulge.

In Germany, he also helped put on shows for the troops and found that he loved performing. So when he was discharged in 1946, he enrolled at the Eastman School of Music in Rochester, N.Y.

In the early 1950s, he came to St. Louis to work at KWK and KSD radio stations. Two years later, he took a job as a freelance announcer at KSD-TV, the only TV station in town at the time.

St. James began hosting “Corky the Clown” in 1954 and stayed until 1980. It was one of the highest-rated local children’s shows in the U.S. In 1966, it became “Corky’s Colorama” and was the first show in St. Louis to be broadcast in color, which is why Corky sometimes had a green or blue face.

After leaving KSDK in 1981, he worked in promotions and community relations for Southwestern Bell Telephone Co. until 1989.

He also continued doing TV and radio appearances, and was one of the most in-demand voice talents in the St. Louis market.