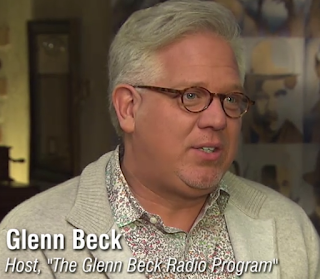 Radio talk show host Glenn Beck known for being combative and controversial, is now trying to become a moderate voice of reason, in the nation’s post-election climate.

Today, Beck says, a lot of the time, he’s “trying to figure out how to be a more responsible person.”

ABC News' Nightline was invited to spend a day with Beck at TheBlaze headquarters outside of Dallas. The Blaze is Beck’s media network, housed inside an old movie studio.

On the day Nightline visited, Beck arrived at just past 6 a.m. He was one of the first in the office, pausing to paint before touring construction progress of his new show set. A legendary workaholic, Beck got into make-up, had a quick meeting with his staff and then went on-air. Close to 4 million listeners per week tune into his three-hour daily radio show with additional audiences watching online and on TV.

For years, Beck has been the jock of shock. But more recently, much of his rage has been directed towards Donald Trump, who he called a “dictator in the making.”

Beck strongly opposed Trump during the campaign, campaigning alongside Sen. Ted Cruz during the primaries. Despite the barbs he once threw at the president-elect, today Beck is cautiously trying to turn the page.

Poisonous is one of the few G-rated words liberals use to describe Beck. Staunchly conservative, he says he wants to be a bridge builder not a flame thrower, but he remains critical of President Obama.

But despite this new tone, Beck is aware that he still has enemies. He has security with him 24/7 and said he is told he receives anywhere between 15 and 18 death threats every day against him and his family.

He admits that some portion of the bitterness in America was fueled by commentators like himself, but it’s a divide he now hopes to bridge.
Posted 5:08:00 AM