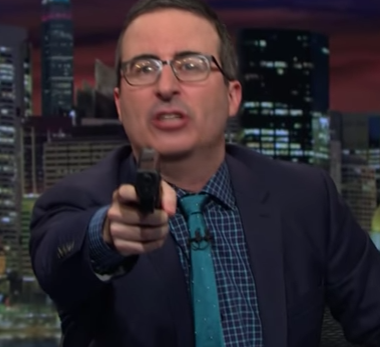 John Oliver took a look at the Sinclair group on Sunday night, examining the conservative-leaning station’s ownership of many local news networks.

“Our main story tonight concerns the potential problems in corporate consolidation of local news,” Oliver began. “National cable news gets a lot of attention with their big budgets and their fancy graphics packages. Meanwhile, local news often has to do a lot more with a lot less.”

He went on to show clips of broadcaster Mark Hyman railing against “political correctness and multiculturalism”.

“Hyman is a commentator and former executive at Sinclair Broadcast Group, and Sinclair may be the most influential media company you’ve never heard of,” Oliver explained. “Not only are they the largest owner of local TV stations in the country, they could soon get even bigger,” referring to the company’s proposed $4bn acquisition of all Tribune Media stations.


According to The Guardian, The Last Week Tonight host then showed several examples of typical Sinclair broadcasts, which lean “noticeably conservative” and even conspiratorial in nature.

“If the opinions were confined to just the commentary or the ad breaks, that would be one thing. But Sinclair can sometimes dictate the content of your local newscasts as well, and in contrast to Fox News, a conservative outlet where you basically know what you’re getting, with Sinclair, they’re injecting Fox-worthy content into the mouths of your local news anchors, the two people who you know, and who you trust, and whose on-screen chemistry can usually best be described as two people.

“You may not realize it’s happening,” Oliver warned, “because Sinclair and its digital news subsidiary Circa not only produce and send packages to their stations; they even write scripts that local anchors use to introduce the pieces.
Posted 3:15:00 AM