Your Next Big Audience: Generation Z 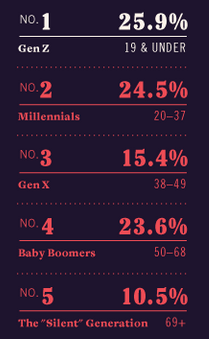 Marketers are honing in on the next wave of consumers: Generation Z.

These folks, born in 1995 or later, make up 25.9% of the United States' population, contribute $44 billion to the American economy and differ from their predecessors in a few key ways, according to mashable.com.

While millennials — a.k.a. Generation Y — grew up alongside the World Wide Web, Gen Z is growing up with social media. This shapes everything from their academics to after-school activities, with more than half of Gen Z using YouTube for research projects and a third collaborating with classmates and watching lessons online.

Instead, Gen Z favors Snapchat, Whisper and Secret — ephemeral and visually engaging platforms that cater to the youngsters' eight-second attention span.
Posted 3:06:00 AM