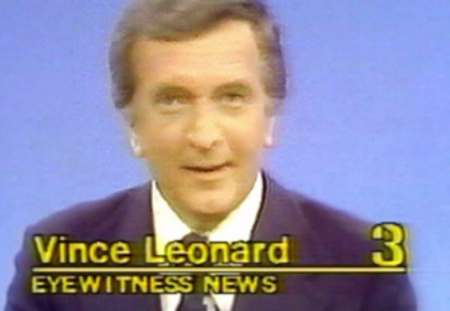 One of the original members of the Eyewitness News Team on channel 3 has passed away. Anchorman Vince Leonard succumbed Friday to a lengthy battle with lung cancer.

Leonard, whose real name was Homer Venske, actually started in Philadelphia on channel 3 in 1958, and was the main anchor when Eyewitness News was born in 1965. He stayed at channel 3 until 1980, six years after Mort Crim joined the team.

"He was a consummate newsman. He cared deeply about the craft," Crim told KYW Newsradio. "He was a good writer. He was an excellent interviewer, reporter and a first class anchorman."

Perhaps the crowning achievement for Leonard came in the late 1970s when he, Crim and the late Jessica Savitch teamed to regain bragging rights as the top rated news in Philadelphia for a time.


But through it all Crim, who stayed close friends with Leonard through the years, remembered his commitment to his craft.

"Vince was happy just to tell it like it is," Crim added, "and present the news straight and without embellishment and without his personal opinion."

Leonard and his long-time wife left Philadelphia for Phoenix, where he was talked out of retirement to work for several more years before giving up news for good in 1989.

The couple then settled in Las Vegas, where he lived until his death.
Posted 1:42:00 PM