Barbara Hayman, 64, a broadcaster who broke the glass ceiling for women as a “boss jock” in Philadelphia Top 40 radio in the 1960s and went on to become a voiceover artist, died Wednesday, March 14, of cardiac arrest at her home.

On the air, Hayman was Barbara Sommers, known for her mellifluous voice and versatility behind the microphone.

Listeners of Power 99 may remember her signature, “I’ve got the power.”

Gerry Wilkinson, CEO of the Broadcast Pioneers and a broadcast historian, noted “Barbara Sommers led the way in Philadelphia as the first woman boss jock,” he told philly.com. “She was on WFIL Radio back in the day when they were a rock and roll giant. Back then, women were not heard very much on radio.

“She may not have been very high in height, but she was tall in stature. She opened doors so that other women could walk through. She led the way for future generations of women.” 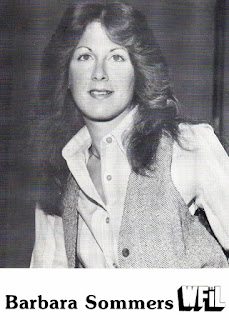 Born Barbara Schneitzer in Boonton, in North Jersey, Hayman was looked upon as a broadcasting talent right after graduating from what is now Rowan University.

“Barbara had natural talent, spontaneous humor, and a unique way she could deliver her message through the mic with a smile,” said radio executive Dean Tyler, who was Sommer's program director at WFIL. “These are traits that can’t be taught.”

Her husband, Wally, said she learned from some of the top men in broadcasting. “She studied them,” he said. “Despite being a woman in a man’s world, they took her in and accepted her as an equal.”

She put her quick wit to work behind the microphone. Once, while introducing  Dick Clark, she asked: “Dick…do you mind if I call you Mr. Clark?”

Her warm, memorable delivery translated well to the medium of television, her husband said.

After her marriage in 1989, she concentrated full-time on freelance voiceover work and helped her husband, a producer/engineer, manage a recording studio in Bala Cynwyd.

Some of the clients whose ads she recorded were Comcast, Independence Blue Cross, Willow Grove Park, Children’s Hospital of Philadelphia, and the Philadelphia Zoo.

Neil Greenberg, a local creative director who recruited her as a voiceover talent, said, “She was at the top of my list. All I had to do was describe the character, and Barbara always delivered in a friendly and hilarious way.”

Her husband said that although Mrs. Hayman had overcome a heart attack and cancer in the last few years, her death was unexpected. “She withstood a lot, yet persevered, grateful to see our children grow up and succeed, and grateful to meet her grandchildren,” he said.
Posted 3:00:00 AM