Fox News Has Laura Ingraham's Back 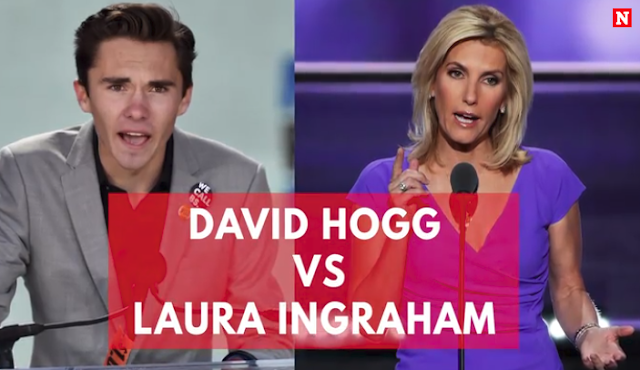 Fox News is standing by its embattled host Laura Ingraham, who has seen advertisers flee her show over a tweet directed at Parkland, Fla., school shooting survivor David Hogg.

"We cannot and will not allow voices to be censored by agenda-driven intimidation efforts," Jack Abernethy, co-president of Fox News, said in a statement to the Los Angeles Times. "We look forward to having Laura Ingraham back hosting her program next Monday when she returns from spring vacation with her children."

Ingraham has gone on a scheduled break after a week in which she came under fire for mocking Hogg, a senior at Marjory Stoneman Douglas High School, after he mentioned in an interview that he was not accepted by four University of California schools.

Hogg responded by listing Fox News advertisers and urging his Twitter supporters to call for a boycott of her program "The Ingraham Angle." Ingraham issued a tweet apologizing for remarks about David, but the student-turned-gun control activist did not accept it.

Although more than a dozen advertisers have stated publicly that they have pulled their commercials from "The Ingraham Angle," far more have stayed away without making any public announcements.

One person familiar with the situation who was not authorized to publicly comment said the boycott has not yet resulted in a significant financial hit.

This person said no advertisers have pulled their dollars from the network but have simply moved from "The Ingraham Angle" to other programs on the Fox News schedule. Most of the advertisers are out because they want to avoid the controversy associated with the story and could revisit the situation in a few weeks after Ingraham returns.

Abernethy's statement is meant to convey that Ingraham will return whether the advertisers come back or not. Fox News hired Ingraham to be a provocative commentator who appeals to conservative viewers, and if she is shut down by advertiser resistance its other hosts will become vulnerable. Ingraham took over the 10 p.m. Eastern slot on Fox News in October.

Fox News executives will not comment beyond the statement, but privately they believe Ingraham's offense does not approach the issues that brought down hosts Bill O'Reilly or Glenn Beck, who both lost their shows after advertisers pulled out.

In April 2017, Bill O’Reilly announced he was going on vacation as advertisers fled his show after the New York Times revealed he had paid millions to five former Fox New personalities to settle claims of sexual and verbal abuse. At the time, a spokeswoman said O’Reilly was scheduled to return, but the host was forced out by the network over the sexual harassment allegations. O’reilly left Fox News with a $25 million settlement while denying any wrongdoing.

A month later, Sean Hannity also announced he was going on vacation for Memorial Day weekend as he lost advertisers over pushing a false conspiracy theory involving Seth Rich, a slain Democratic National Committee staffer. Hannity ultimately returned to his show after a few days. Rich’s parents are suing Fox News over a retracted story falsely linking him to the hack of DNC emails during the 2016 presidential election.

On Sunday, CNN Reliable Sources host Brian Stelter questioned whether ad boycotts are the right way to respond in such situations, calling the boycotts “dangerous” and suggesting critics “meet their comments with more speech.”
Posted 3:11:00 AM