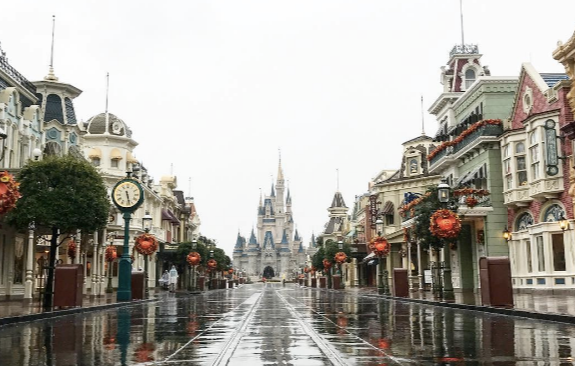 The Walt Disney Company today reported earnings for its second fiscal quarter ended March 28, 2020. Diluted earnings per share (EPS) from continuing operations for the quarter decreased 93% to $0.26 from $3.53 in the prior-year quarter.

“While the COVID-19 pandemic has had an appreciable financial impact on a number of our
businesses, we are confident in our ability to withstand this disruption and emerge from it in a strong
position,” said Bob Chapek, Chief Executive Officer, The Walt Disney Company. “Disney has repeatedly shown that it is exceptionally resilient, bolstered by the quality of our storytelling and the strong affinity consumers have for our brands, which is evident in the extraordinary response to Disney+ since its launch last November.” 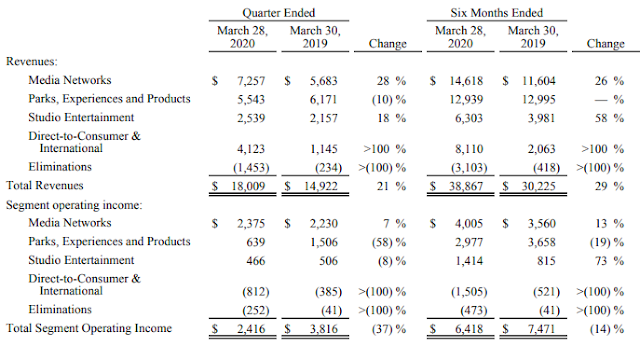 The Wall Street Journal reports the business impact of the pandemic will likely be even more pronounced in the current quarter. Shutdowns that first began in Asia became more widespread globally only in the final few weeks of Disney’s fiscal second quarter.

Disney’s net income for the quarter fell 91% to $475 million, due to both the impact of the virus and accounting for the consolidation of assets acquired in its 2019 deal with 21st Century Fox.

Analysts have downgraded Disney stock, envisioning a future defined by the highly contagious virus, even as stay-at-home orders are lifted and businesses reopen.

Bob Iger, Disney’s executive chairman, sounded an upbeat note for investors, saying the company’s movies and parks will be sought out once again when lockdowns end. “People find comfort in our messages of hope and optimism,” he said.

Unlike conglomerates that encompass various holdings without much functional interconnection, Disney is a finely tuned franchise machine, capable of absorbing a set of characters like the Marvel Studios superheroes or the Star Wars universe and using them to sell movie tickets, action figures, streaming-service subscriptions and theme-park tickets.

But the pandemic has caused practically every part of that machine to grind to a halt. The close coordination that made for lucrative use of characters and story lines across different parts of the company has now led to a domino-like cascade of problems throughout its divisions.

Disney said the $1.4 billion pandemic-related impact in the latest quarter reflected not only movie-release delays and theme-park closures, but also lower ad revenue at its TV networks and shuttered productions on Broadway.

The division that includes the Disney+ streaming service posted revenue of $4.1 billion in a quarter that registered a significant boost in subscribers.

But Disney is still spending heavily on production and marketing the service, and consolidation of its Hulu holding led to an operating loss at the division of $812 million. Disney controls Hulu following its $71.3 billion acquisition of the entertainment assets of 21st Century Fox.

Disney+ has been a rare bright spot for the company since the pandemic led to stay-at-home orders around the world. The streaming service had 54.5 million subscribers as of Monday, Ms. McCarthy said, up from 33.5 million on March 28.

Like its parks division, Disney’s media networks segment, which includes ESPN, will likely take a big hit in the fiscal third quarter as major sports leagues stay on the sidelines.

Disney on Tuesday announced Shanghai Disneyland Park will reopen May 11. The sprawling Chinese destination was the first of the company's parks to go idle in late January due to the coronavirus pandemic, while Disney's parks in the U.S. have been closed since mid-March.

And while CEO Bob Chapek said on a Tuesday earnings call it was too soon to talk about the Anaheim and Orlando parks again welcoming guests,
Posted 3:30:00 AM