Joseph W. Timmer, known to many legions of Lehigh Valley, PA polka fans as "Jolly Joe," has rolled out the last dance tune on his Bethlehem radio station, WGPA 1100 AM (250 watts, Day-Only).

Confined to a nursing home with dementia, the 85-year-old Timmer was declared incapacitated last year by a Northampton County Court judge. He and his wife, Dorothy, are in a Bethlehem nursing home, according to the Allentown Morning Call.

The 250-watt station has been sold for $95,000 to CC Broadcasting LLC of Kutztown. The Federal Communications Commission must rule on the license transfer.  Timmer, through his guardians, also is trying to sell his other assets.

"It's a shame," said Mindler, "but AM radio is dying out and Jolly Joe was WGPA."

The station, which broadcasts during the daytime, has featured a mix of music, including Timmer's polka shows, talk and syndicated shows. Revenue has dropped at WGPA since Timmer stopped working at the station about two years ago. 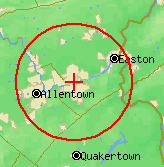 Timmer, a Marconi Award winner,  was popular with his orchestra and brand of polka music before he bought the station in 1992. The International Polka Association, which inducted him into its hall of fame in 1980, said Timmer began holding events beginning in 1970 at his Moore Township grove, featuring some of the country's best polka bands.

At one time, the Bethlehem resident also had shows on radio and television, a band and music store — all strongly promoting polka music.