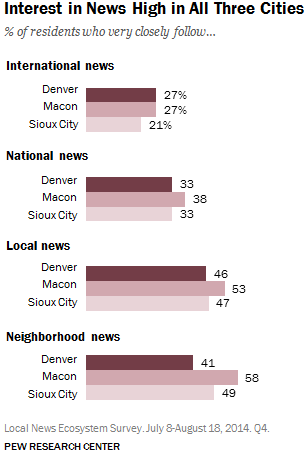 A new study released by Pew Research Center indicates a interest in local news content in each of three metro areas studied—Denver, Macon and Sioux City.

The surveys probed residents about their news habits, civic engagement and attitudes about the city and the media that serve it. Because each city received its own customized survey, the data are kept separate rather than being combined, and comparisons are made from one metro area to the next.

According to Pew, there is one overarching finding to emerge from the three surveys.  the study indicates a pervasive interest in local news across these metro areas. In all three cities, nearly nine-in-ten residents follow news about their local area very or somewhat closely, and roughly half follow it very closely, with Macon showing the highest rates of the three. There is more differentiation when it comes to news at the neighborhood level, as about four-in-ten (41%) Denver residents follow neighborhood news very closely, compared with 58% of Macon residents and 49% of residents in Sioux City.

In the ways that residents keep up with and engage in local news, Denver shows some clear signs of greater digital connection. But many news habits are strikingly similar from city to city. Traditional news outlets still dominate, even in Denver, though certain niche or government entities make a mark in each city. Across the three cities, residents comment on news websites or blogs, call into news programs and share news in social media at roughly the same rates. Local government and politics as well as the local economy are discussed often by about half of the residents in each city. And the most civically engaged consistently show a greater connection to local news.
Posted 8:39:00 AM