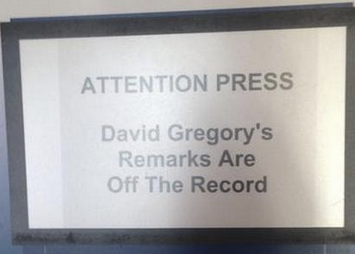 Former 'Meet The Press' moderator David Gregory gave a talk at a bankers conference on Wednesday that was deemed "off the record" for reporters, despite the fact that almost every other event at the conference was on the record, according to Dylan Byers at Politico.

Gregory was a featured guest at the Independent Community Bankers of America conference in Florida, which attracts roughly 3,000 attendees and is open to members of the press. But a placard outside Gregory's event instructed the press that the newsman's remarks were "off the record."

Rob Blackwell, the Washington Bureau Chief of American Banker, which had a reporter at the conference, called the stipulation "ridiculous."

"It seems pretty clear that Gregory asked for his comments to be off the record (because the rest of the conference was on the record), but you can’t get up in front of thousands of attendees and just declare your remarks are off the record, particularly when you’re a journalist and you should know better," Blackwell told the On Media blog on Wednesday.

Robert Barba, the American Banker reporter, tweeted an image of the "off the record" placard, which set off a chorus of jokes and criticisms on Twitter. Barba went ahead and tweeted out some of Gregory's remarks anyway. Per Barba, the former NBC anchor praised Jeb Bush for his experience and willingness to stand up to his party, and also said that the tea party had more in common Sen. Elizabeth Warren than it did with mainstream Republicans.

In one instance, Gregory dinged the press: "There are a lot of good journalists out there. There's also a lot of laziness," he said.