Paul Revere, the organist and leader of the Raiders rock band, has died.

Roger Hart, manager for Paul Revere and the Raiders, said he died Saturday at his home in Garden Valley, Idaho, from cancer. "He'd been quiet about it for some time," Hart said. "Treated at the Mayo Clinic, Paul stayed on the road as long as he could, then retired recently back to Idaho, where he and his wife, Sydney, always kept a home."

Revere, born Paul Revere Dick, became known as "the madman of rock and roll" for his theatrical colonial wardrobe and infectious onstage persona with the band. "From Day 1, we've always been a party band that accidentally had some hit records and accidentally got on a hit television series," Revere told The Associated Press in a 2000 interview.

The group launched its career in 1963 with a popular rendition of Richard Berry's "Louie, Louie" before releasing its own hits, such as "Kicks," "Hungry" and "Good Thing." The band's biggest smash came in 1971 with "Indian Reservation."

Paul Revere and the Raiders began in 1965 recording a string of garage rock classics. Under the guidance of producer Terry Melcher, the group relocated to Los Angeles and increasingly emulated the sounds of British Invasion bands such as The Beatles, The Rolling Stones, The Dave Clark Five, and The Animals, while adding an American, R&B feel. Their first major national hit, "Just Like Me" (No. 11, 1965) was one of the first rock records to feature a distinctive, double-tracked guitar solo, performed by guitarist Drake Levin. 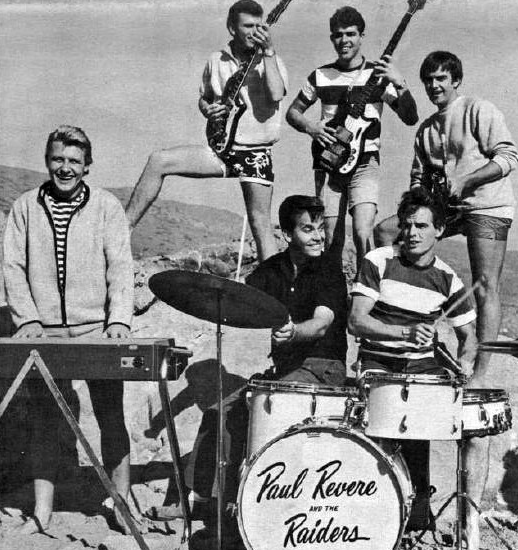 The band appeared regularly in the U.S. on national television, most notably on Dick Clark's Where the Action Is, Happening '68, and It's Happening, the latter two co-hosted by Revere and Lindsay. In their television appearances, they were presented as an American response to the British Invasion. Playing on Revere's name, the group wore American Revolutionary War soldier uniforms and performed slapstick comedy and synchronized dance steps while the ponytailed Lindsay lip synced to their music. This farcical, cartoon-like image obscured the proto-hard rock sound their music often displayed.

In November 1966, the band appeared as themselves performing a song on the popular Batman television series in the episode "Hizzonner the Penguin".

Their hits included "Kicks" (Billboard Pop Chart No. 4), "Hungry" (No. 6), "The Great Airplane Strike" (No. 20), "Good Thing" (No. 4), and "Him or Me - What's It Gonna Be?" (No. 5). Of these, "Kicks" became their best-known song, an anti-drug message written by Barry Mann and Cynthia Weil that was originally earmarked for The Animals. (Mann later revealed in interviews that the song was written about their friend, fellow 1960s songwriter Gerry Goffin, whose ongoing drug problems were interfering with his career with then-wife Carole King.)

In mid-1967, with three gold albums to their credit, The Raiders were Columbia's top-selling rock group; their Greatest Hits was one of two releases selected by Clive Davis to test a higher list price for albums expected to be particularly popular (along with Bob Dylan's Greatest Hits).
Posted 3:00:00 AM