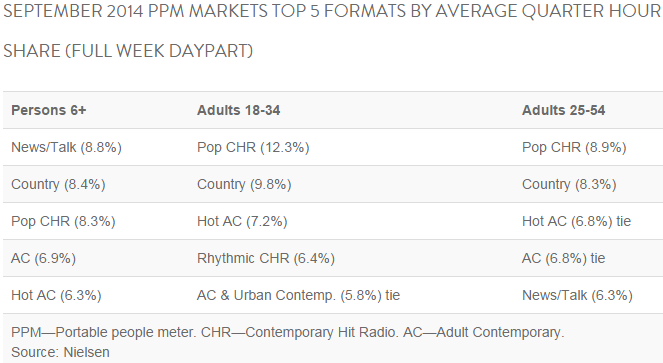 School is back in session, the mercury has dipped a bit, and the news and sports cycles have picked up, according to Nielsen.

Results from the September portable people meter (PPM) radio-listening trends reveal some surprising cooling trends for a host of music formats and some seasonal upswings in the spoken word arena. It’s worth noting that the September survey spanned parts of August and September, including the week of Labor Day, which is the traditional bookend to the summer vacation season.

The Classic Hits format made headlines in August by wresting the “format of the summer” distinction away from Country and Pop Contemporary Hit Radio (CHR), growing its audience shares the most of any format during the summer. Classic Hits couldn’t keep the momentum going in September though, which is indicative of a larger trend we saw during the month where some major music genres cooled off. Country, Hot Adult Contemporary (AC), Pop CHR and Classic Rock had all seen impressive growth in recent months, but listening for each format was flat or down in September.

For Sports and News/Talk, however, September marked a return to pre-summertime listening levels, following a predictable seasonal trend when audiences tend to spike. Sports shares among listeners 6+ were up 10% this month (from 4.1% to 4.5%) and up 9% in the 25-54 demo (growing from 4.7% to 5.1%). When football returns and the MLB pennant races come down the stretch each year, sports formats typically score larger audiences.

News/Talk also had a good September; the format’s shares among the 6+ demo were up 4% this month and have increased 9% since July. The 8.8% share is the highest for News/Talk since April. And among listeners 25-54, a 5% uptick in September (to 6.3%) was the best showing since March.

To get a feel for the cyclical nature of sports and news listening, the table below tracks the 6+ audience shares for each format in PPM markets since the start of 2011, and the annual rebound that occurs in the fall – something we will be tracking next month with October data. 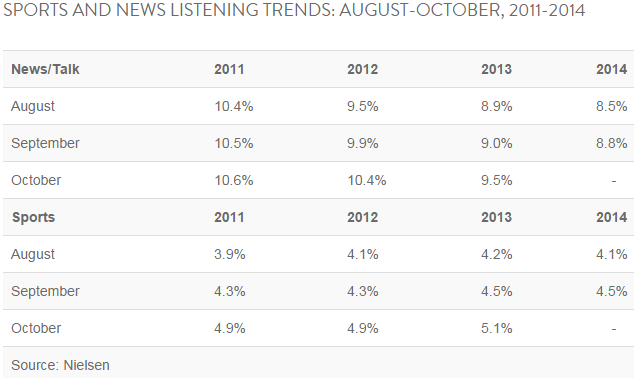