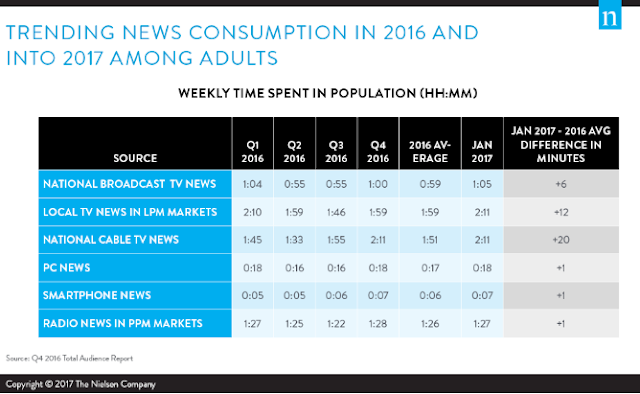 Each of the major cable news channels -- CNN, Fox News and MSNBC -- bragged about their audience gains during the 2016 presidential election cycle. Across the board, just how much more cable news did Americans watch?

According to a new Nielsen report, adults over 18 watched 27.1 billion minutes of cable news in 2016, a 44% spike over the 18.8 billion minutes in 2015. That jump was largely responsible for an 18% overall increase in news consumption across all media, including broadcast news, radio and smartphone news.

The Wall Street Journal reports adult news consumers spent nearly 6.5 hours a week watching national cable TV news in 2016 -- up nearly an hour-and-a-half from 2015, and an hour and 45 minutes from the last presidential election cycle in 2012, reports Nielsen.

Glenn Enoch, senior vice president of audience insights at Nielsen, attributed the uptick to a barrage of news headlines in 2016, including topics such as the presidential election, Syria, refugees, Brexit, Zika and terror attacks. “Americans responded by watching, listening to and reading more news -- a lot more news,” he wrote in the report.

After cable news, the next most consumed type of news media in 2016, in terms of total minutes per week, was local broadcast. Radio consumption was up slightly compared with the same period of 2015, while local TV news was flat.

According to Nielsen, n fact, both smartphone and radio news experienced increases from 2015 to 2016 in both reach and time spent in every age demographic the report looked at. For example, radio news in the portable people meter (PPM) markets reached 27.1% of all adults (18+) in the average week, up from 26.3% in 2015. These adults also spent an average of nearly five-and-a-half hours listening to news weekly, 14 minutes more than in 2015. And smartphone news consumption was also up among adults, reaching over 27% of adult 18+ in the average week in 2016, up from 23.6% in 2015.
Posted 3:57:00 AM