Brad Messer, who spent 47 years in the broadcast industry as a talk radio host and news director in 12 major markets around the country, has died in hospice care.

Twenty-Seven of those years, off and on from 1980 to 2007, were spent at KTSA 550 AM in San Antonio where Messer was named among The 100 Most Important Radio Talk Hosts in America for seven consecutive years.

Brad Messer was propelled into radio news at KILE in Galveston, Texas, in 1961 when the newsman there was too sick to work and someone had to fill in on the spot. That brief on-air stint led to a full-time radio career as a news director at stations from Houston and Dallas to San Francisco and Los Angeles.

In 1977 Messer joined KTSA as news director. He left to work in North Carolina and in California, but returned to KTSA three more times, as news director, then operations manager, and finally as talk show host for 16 years. 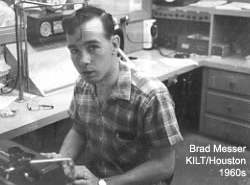 During his years as a talk radio host, Messer cited several on-air conversations as especially memorable. But one in particular stands out:  In 1992 on the topic of the military draft, one caller mentioned his tour in Vietnam. He thought it would be appropriate to thank him for his service, although he had never heard that done. He said, simply enough, "Thanks for going over there."

The caller was silent for so long that Brad thought maybe he had hung up, when the vet finally said, in a choked-up voice, "That's the first time anyone has ever said thank you." After that, Brad made it a point to express appreciation for the military service of his KTSA listeners.