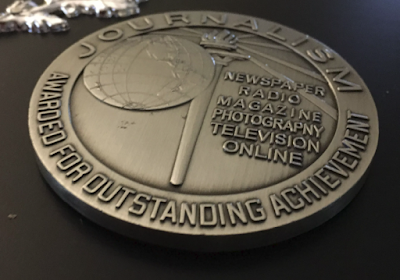 Westwood One News is the winner of The National Headliner Award for its reporting and coverage of the Parkland school shooting in Florida last year.

This award recognizes the entire Westwood One News staff for its in-depth live coverage, newscasts, special reports and long form coverage. The First Place award was in the “Breaking News or Continuing Coverage of a Single News Event” category. The Headliner Award judges said Westwood One News’ reporting was "precise and eloquent coverage of the Parkland shooting. Radio at its best: the sound and the actualities tell the story; clear and compelling writing."

Westwood One News dominated this important category by also winning Third Place for its coverage of Hurricane Michael.

Founded in 1934 by the Press Club of Atlantic City, the National Headliner Awards program is one of the oldest and largest annual contests recognizing journalistic merit in the communications industry. The first National Headliner Awards were presented in 1935. Medallions are presented to outstanding writers, photographers, daily newspapers, magazines, graphic artists, radio and television stations and networks, and news syndicates.

Westwood One News, launched in January 2015, was created to offer radio stations greater flexibility and local branding opportunities, enabling them to integrate comprehensive network news coverage into their local operation. What can Westwood One News do for your station? Learn more by contacting Jim Jones at jimjones@westwoodone.com or (202) 840-7933.