Edison Research’s Podcast Consumer 2019 study shows a record 197 million Americans are now familiar with the term “podcasting” yet only 144 million have actually listened to a show. One of the biggest reasons for the 53 million-person gap rests in the hands of show producers.

InsideRadio reports its survey data shows four-in-ten people said podcasts aren’t quick listening. A related data point: 51% said they just don’t have the time in their mobile data allotment to listen to podcasts. And when it asked people what makes them listen to podcasts more, more than half (57%) said they would if they had more time to listen.

Even among those who do listen to podcasts, show length can be an issue. Just a slight majority (51%) of monthly podcast listeners typically listen to an entire podcast. And while fewer than one-in-ten drop out before the halfway point in a show, it’s not a guarantee that fans make it to the end point. 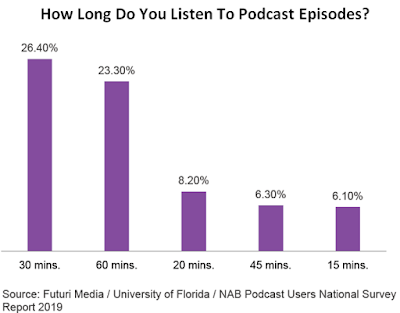 A separate survey released in recent days, this one conducted by the University of Florida College of Journalism and Communications in conjunction with Futuri Media, asked podcast consumers how long they typically spend listening to a show. It reports about half of those surveyed say they spent between 30 and 60 minutes with a show.

“We found that on average, users are listening to 50 minutes each time in this study. For those of you that know the average tune in for a broadcast [radio], which is around eight and half minutes, that’s an extraordinary amount of time spent in a session,” Futuri president Daniel Anstandig said while unveiling the results at the NAB Show last week.
Posted 5:24:00 AM